This was our last day on the cruise and we just had one morning activity on the schedule. Overnight, the boat had traveled to Baltra island and was anchored between Baltra and North Seymour island. Getting off to an earlier start than usual, we got breakfast around 6 AM and dry-landed on North Seymour island, a small unpopulated island to the north of Baltra island. 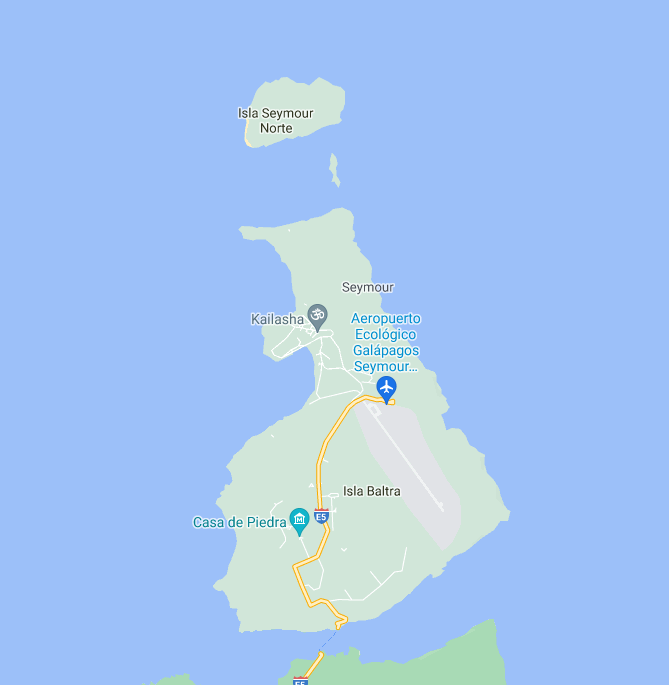 North Seymour island is similar to Genovesa island in being a nesting area of Frigate birds, blue-footed boobies and other Galapagos birds and hosting a palo santo forest. Unlike Genovesa, but similar to South Plaza island we visited on our first day, North Seymour island was formed by uplifting of the underwater layer resulting in a very eroded flat rock. The marine history is still evident in the giant rocks and shells covered landscape, in contrast to the lava rock covered terrain on Genovesa island.

We walked along a ~1 KM long path, first through a palo santo forest and then by a beach. We saw several blue-footed boobies and masked boobies nursing their young, as well as several frigate birds resting on tree branches pointing their beaks upwards, spreading their wings and displaying the red throat pouch — to attract females.

Along the beach, we saw many sea lions and marine iguanas lounging on the rocks.

We also saw some rat traps to eliminate the rat population on the island. Rats were unwittingly introduced to the island by sailors and play havoc with the local ecosystem by devouring bird eggs and young chicks. 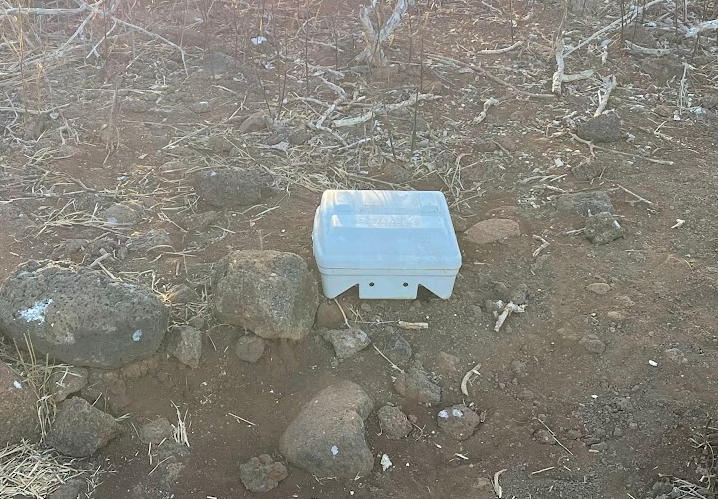 The cruise ship took us back to Baltra island and we used the zodiacs for the last time to disembark at the harbour. From the harbour, we took a bus to the airport. Most people on the cruise were flying out of Baltra island, but Mike and I were staying a few days on Santa Cruz and Isabela, so we waited at the airport for our driver (arranged by our tour company) to arrive. The driver arrived around 10 AM and drove us to our hotel in Puerto Ayora, capital city of Santa Cruz island. Along the way, we stopped to take pictures at “Los Gemelos”, volcanic sink holes that we had driven by on day 4 but without a stopover.

The book about volcanoes on the cruise boat had a very nice illustrated description of how these sink holes are formed. Here’s a summary. When the volcanoes on the islands were still active, lava would roll down the hills to get to the sea. Lava being a viscous liquid moves faster in the middle and slower closer to the edges. The slower moving, outer lava cools faster than the middle and starts to dry, allowing for the formation of lava walls that enclose the hotter lava within. These walls eventually become lava tunnels (which we saw earlier) and magma chambers, which can be widely found throughout the highland of Santa Cruz. These geological formations remain underground for thousands of years until their roofs collapse due to erosion, resulting in the formation of sink holes like Los Gemelos.

Puerto Ayora is a neat little town with lots of hotels, restaurants and shops, outfitters renting snorkeling and scuba equipment, all within walking distance. To me, it seemed to have a Key West vibe to it.. It is a lot smaller and much more low key, but the ambiance made me think of Key West, which Mike and I had visited in November 2021. We had lunch at a restaurant called Almar. The restaurant has great food and sea-side seating. There were several marina iguanas and sea lions lounging in the sun very close to our table, which was both unique and a little disconcerting. We also saw several pelicans and boobies dive into the water to catch fish. Being so often in close proximity to several animal species paying you no heed and going about their natural activities is one of the most unique aspects of Galapagos islands! 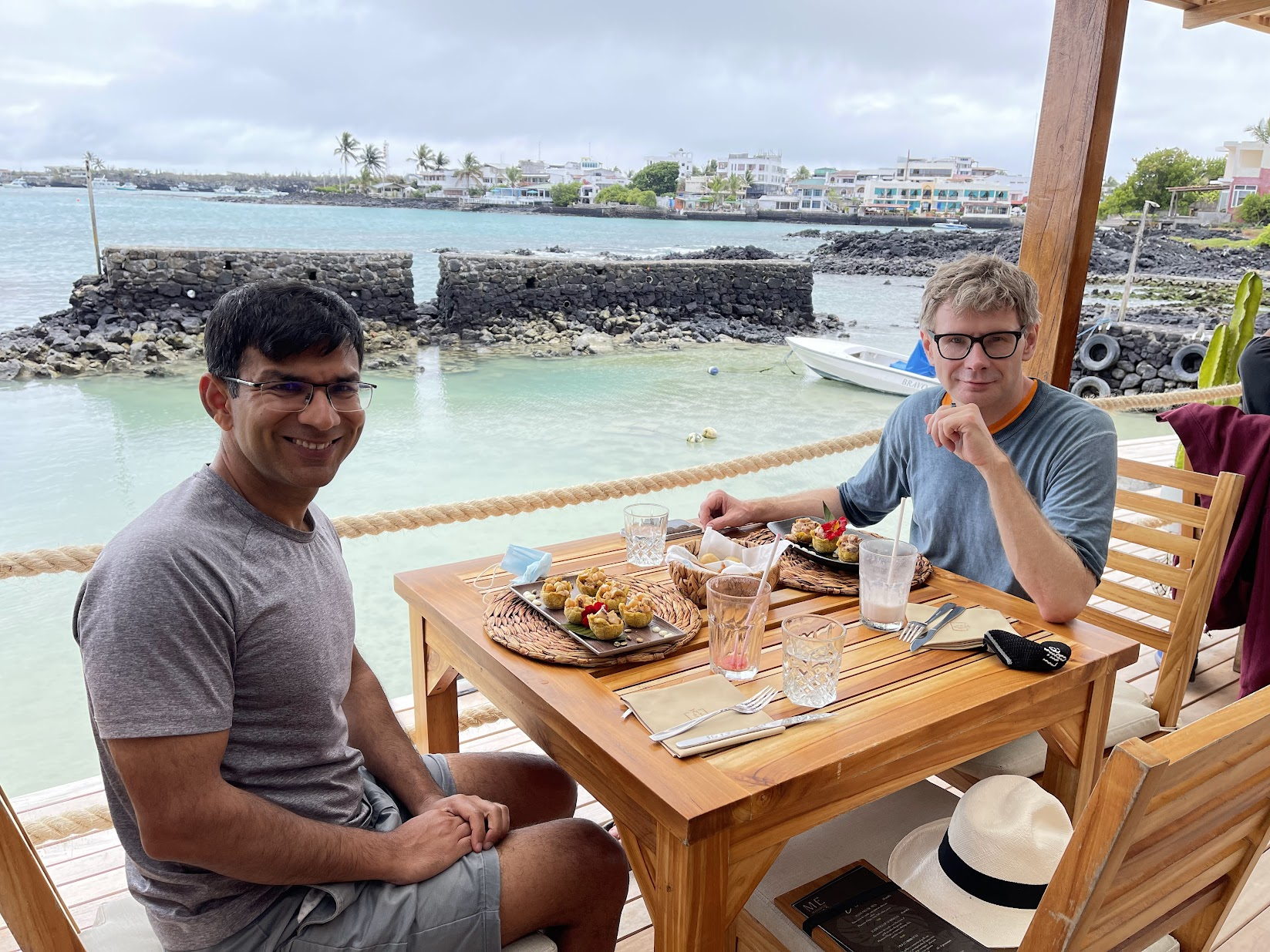 From the restaurant, we walked over to the Charles Darwin research center. The center is free to visit and has a nice visitor center with information about various conservation efforts underway on the islands. It was interesting to learn how non-native species of plants and animals are hurting native populations. The story of the Mangrove Finch, one of Darwin’s iconic finches, was particularly interesting. This critically endangered bird species (population estimated at only ~100 individuals in the wild) found only in the dense mangrove forests of the western Galapagos Islands faces twin threats to its survival from introduced parasites black rats and flies. Black rats will invade 70% of the nests, where they prey upon the eggs. If the eggs survive this threat and succeed in hatching, they may then be affected by parasitic fly that lays its eggs in the nest. When the fly larvae hatch, they feed on the blood of the Mangrove Finch nestlings; few nestlings survive this parasitism. The Darwin research center along with other institutions has been working on a long-term conservation project that combines rat control and bird monitoring with a captive-rearing and reintroduction program to give the Finches a fighting chance. Go Mangrove Finches! 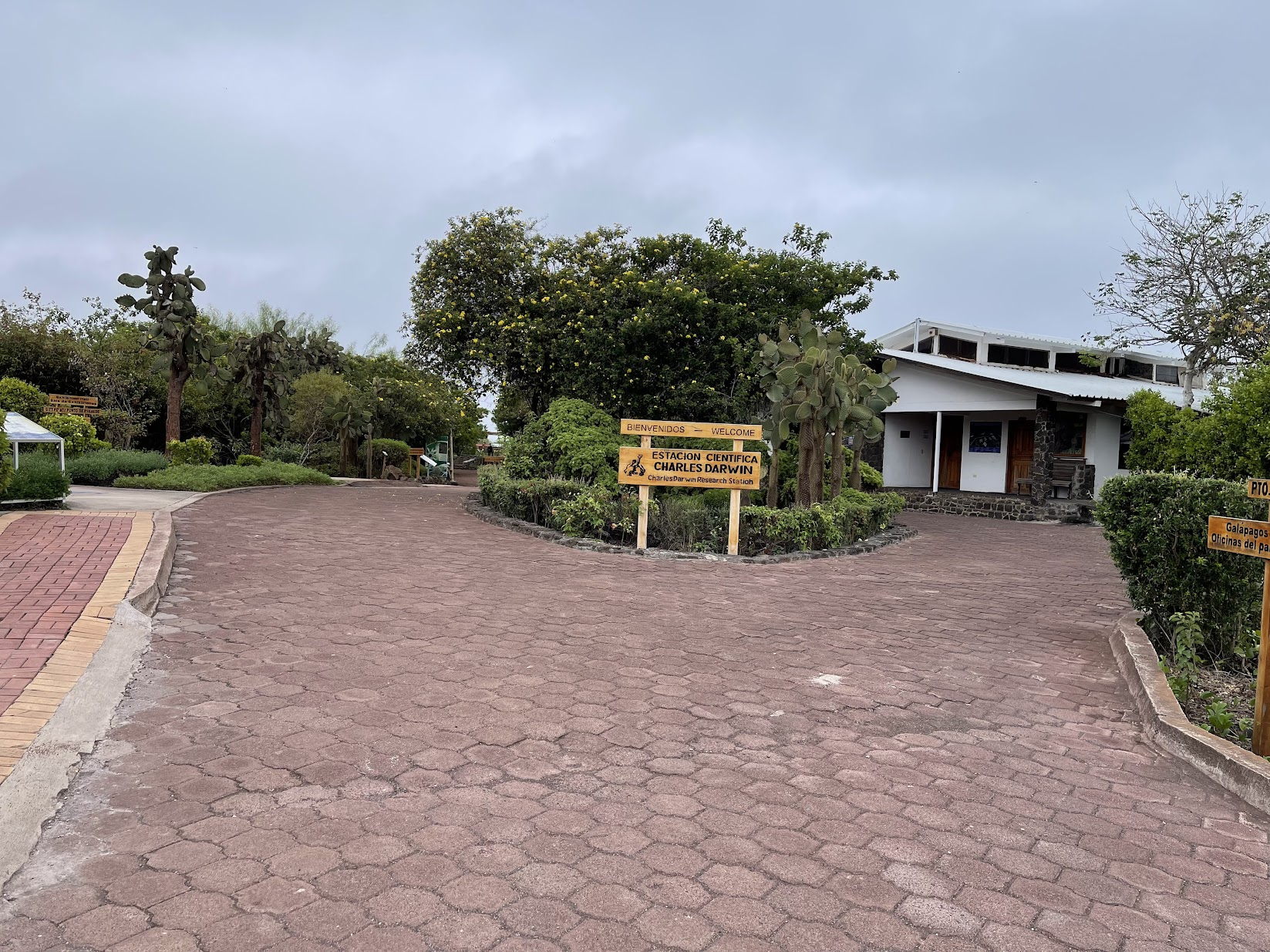 The Darwin research center also has a giant tortoise breeding station (which costs $10 to visit), but we didn’t visit it because we had seen enough giant tortoises a few days before.

After the Darwin research center tour, we walked back to our hotel and relaxed for a bit. We had dinner at Muelle de Darwin restaurant, which has a great ambiance and good food. Both lunch and dinner reservations were made by our tour company and prepaid, so we just had to pay for drinks.