The two main activities on Day 4 were a motor boat trip to Turtle bay in the morning and visit to a private tortoise reserve in the afternoon. In the morning, we took the zodiac to Black Turtle Cove, a mangrove estuary on the North side of Santa Cruz island. As you can see on the map below, the narrow mouth of the cove blocks out the ocean waves and provides a perfect habitat for a variety of plant and animal species such as rays, turtles, sharks, blue-footed Boobies, pelicans and many others.

We entered the cove at low tide and the water line could easily be seen in the exposed roots of the red mangrove trees. 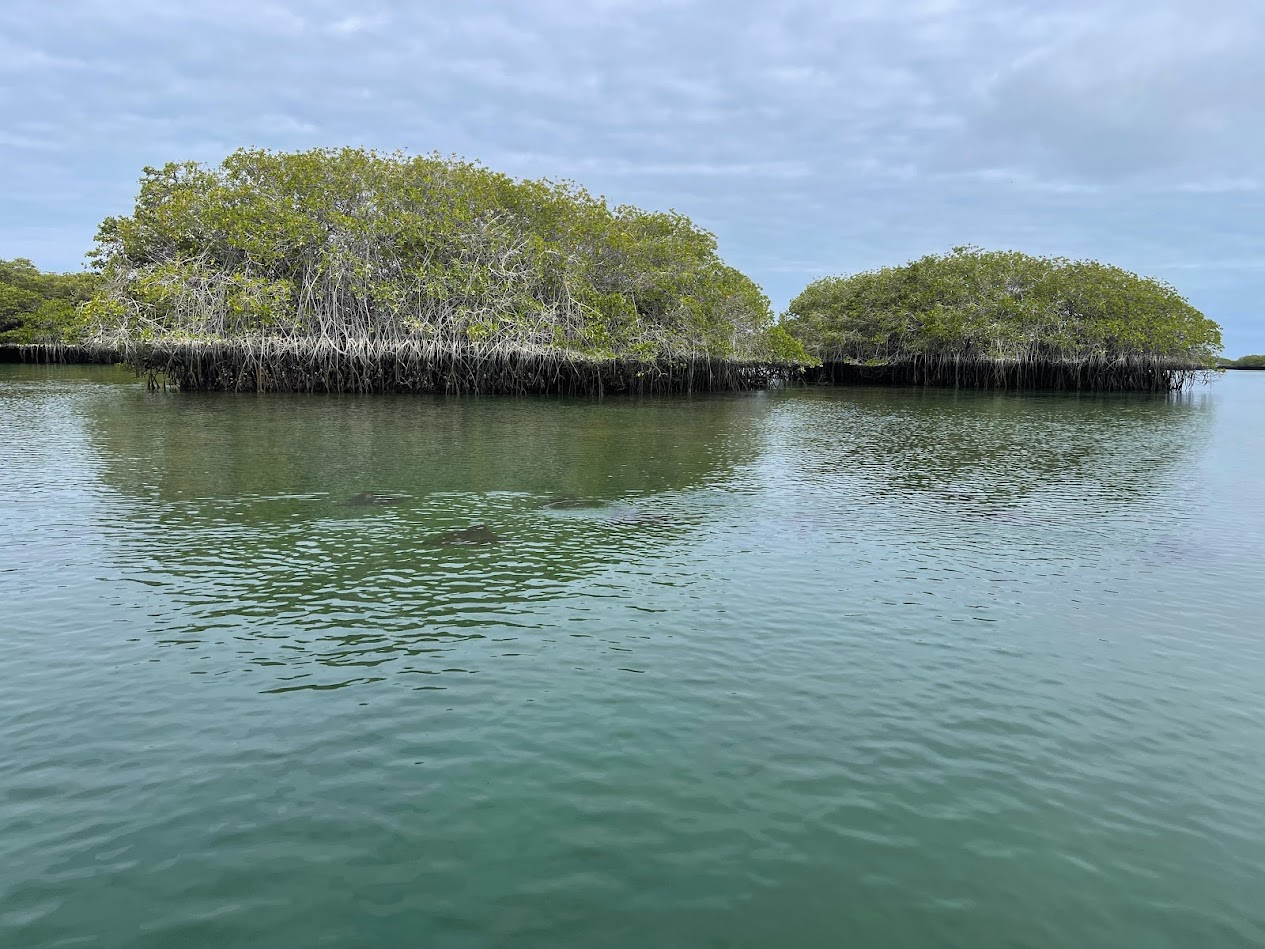 As we motored deeper into the cove, we started seeing schools of eagle ray, snapper and other fish. However it was the sight of the blue-footed Bobby that drew out a collective sigh of astonished delight from everyone on the boat. We saw two blue-footed boobies perched on mangrove tree branches right by the water, preening without a care in the world. They are quite a sight! Incidentally, you may be wondering why these birds are called “Bobby”. The name is thought to come from the Spanish word “bobo” meaning “stupid,” which is how early European colonists may have characterized these clumsy and unwary birds when they saw them on land—their least graceful environment. 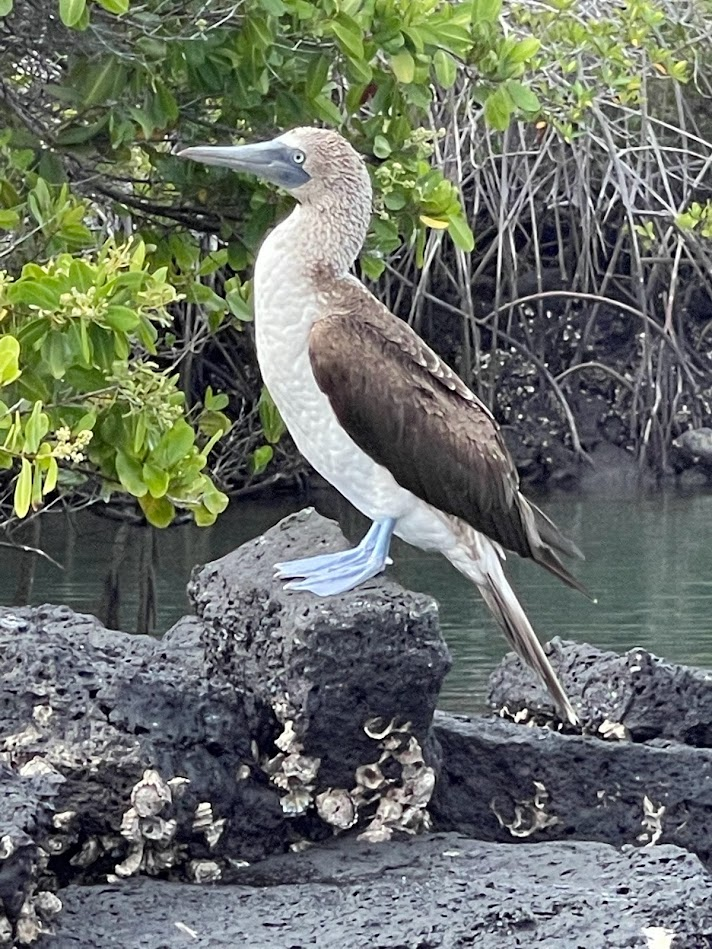 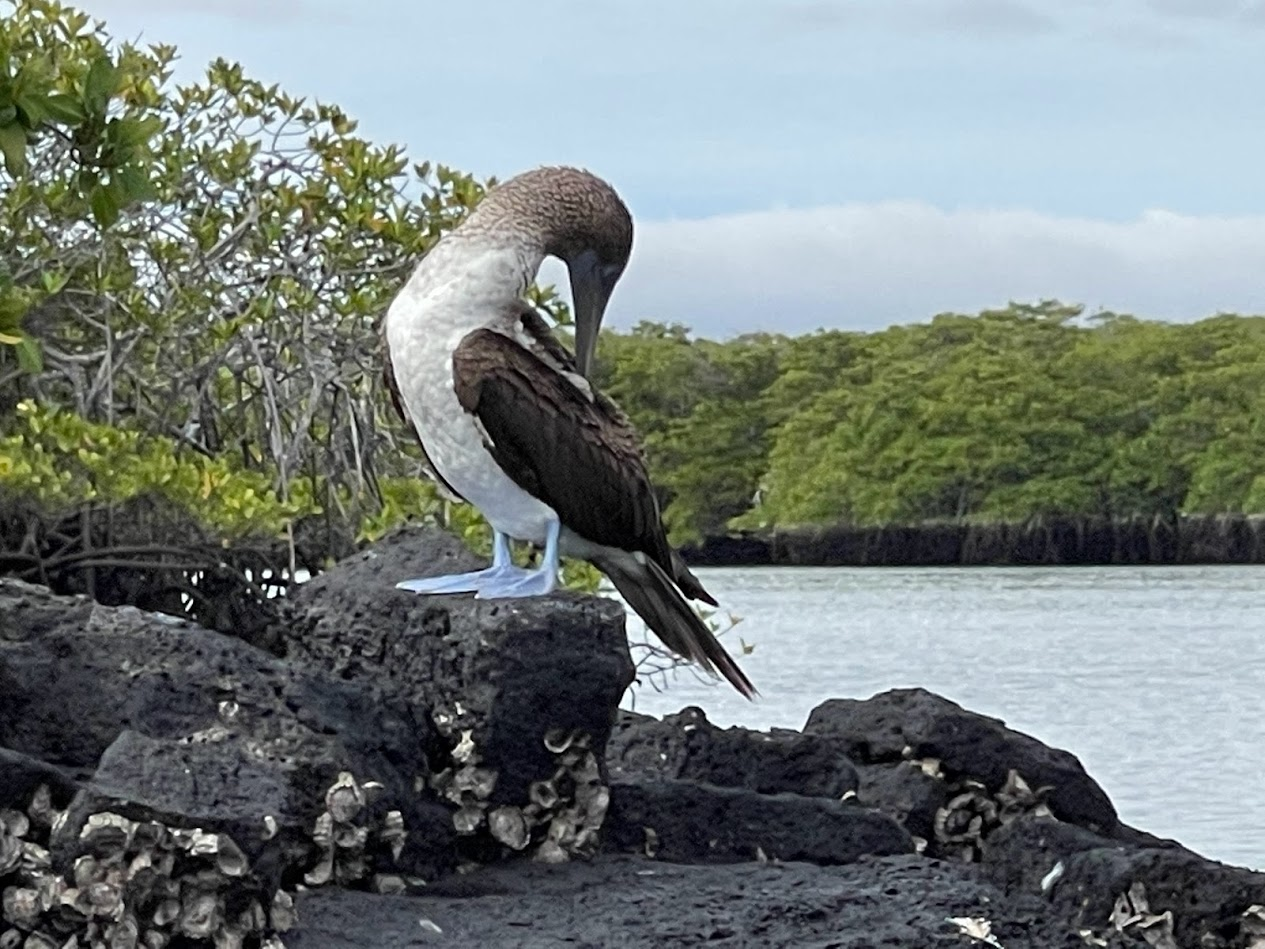 After people had filled half their phone memory with blue-footed bobby photos and videos, we went further into the cove and started seeing sea turtles. The gentle, graceful way the sea turtles swim through the water is alluringly serene. Every once in a while they’d stick their necks out of the water to take a deep gulp of air. As sea turtles are air breathing reptiles, they need to surface to breathe. Sea turtles can hold their breath for several hours, depending upon the level of activity. A resting or sleeping turtle can remain underwater for 4-7 hours. During routine swimming, they take a breath every 10-15 min or so. This article has several interesting facts about sea turtles such as the gender of sea turtles is determined by the temperature of the nest.

We also saw several baby sharks and Sally Lightfoot crabs were everywhere on the black lava rocks. On the way back to the cruise ship, we saw a school of golden rays

After a memorable tour of black turtle cove, we rode back to the boat and had lunch (octopus, fish, rice, salad, steak and relaxed for a few hours). Around 2, we commenced our tour of the giant tortoise preserve. We boarded the zodiacs to the Santa Cruz island harbor and boarded a bus to the tortoise reserve, about a 30 minute drive. It was interesting to see the vegetation transition from small, scraggly, sparse grass to denser bushes and finally to lush forest as we drove towards the interior, higher parts of the island that get more rain. We also passed by two sink holes (called Los Gemelos, more about these later) along the way and made one stop to walk through a lava tube. We saw several lava tubes later on our trip, however the ones in Santa Cruz island are the biggest (tall enough for people to stand inside). The walls are made of black volcanic rock, stained brown and red through years of erosion. Unlike caves formed by the action of rain water, stalactites and stalagmites were notably absent. 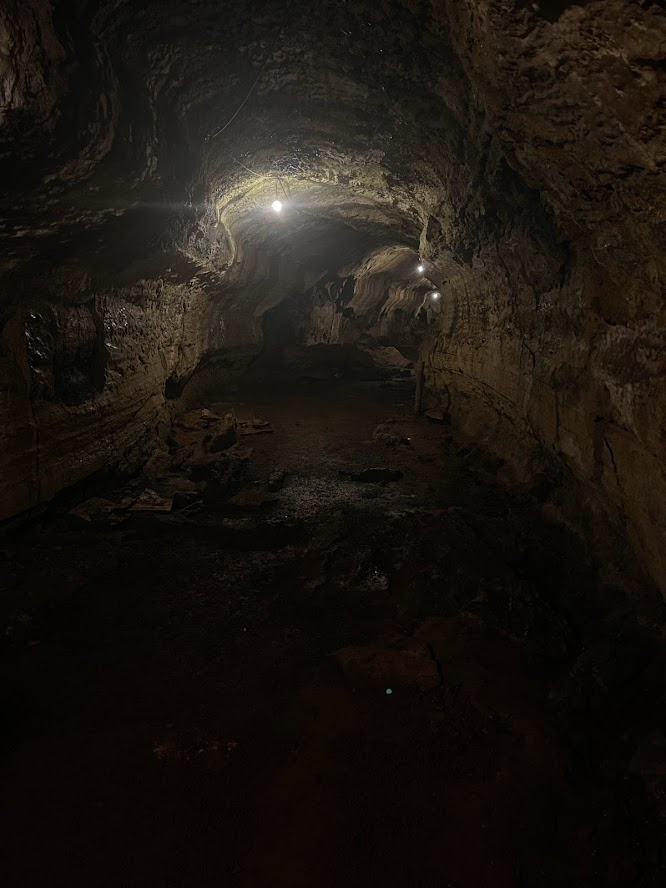 Later on the cruise ship, I found this book about Volcanoes that had very nice descriptions of how various geological formations we later saw on the Galapagos islands were formed. 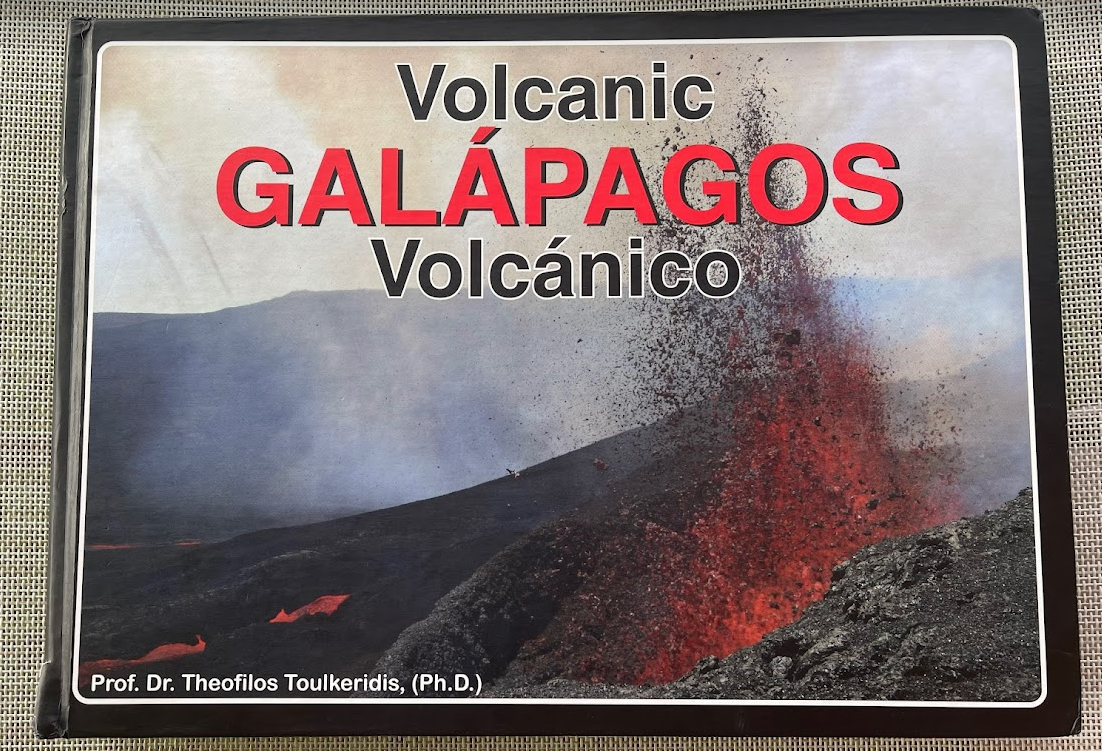 According to this book and wikipedia, lava tube form when a low viscosity lava flow develops a continuous and hard crust, which thickens and forms a roof above the still-flowing lava stream. Lava usually leaves the point of eruption in channels. These channels tend to stay very hot as their surroundings cool. The surroundings slowly develop walls around them as they cool and/or as the channel melts its way deeper. Eventually, the walls come together, forming an insulating tube that keeps the lava molten and serves as a conduit for the flowing lava. When the supply of lava stops at the end of an eruption or lava is diverted elsewhere, lava in the tube system drains down the slope and leaves partially empty caves.

After the walk through the lava tube, we continued on towards the tortoise farm. As we approached the tortoise farm, we could already see several giant tortoises lounging on the grass along with herds of cows. After arriving at the farm, we walked along a 1.5 km trail that winds along lush vegetation, several ponds and is full of giant tortoises. We saw tortoises munching on grass, fruits, walking, chilling in the muddy pond to cool off, retracting their head in their shell when they detect danger and slowly extending it out again.. They are fascinating animals to observe!

As I mentioned earlier in this blog, giant tortoises are one of the longest living animal species. According to this article, some of the reasons for their unusual longevity are a very slow metabolism (they can live for up to a year without food and water) and a handful of gene variants which promote a healthy, full immune system, quick DNA repair and a natural defense against cancer.

We also saw several types of mocking birds and finches. 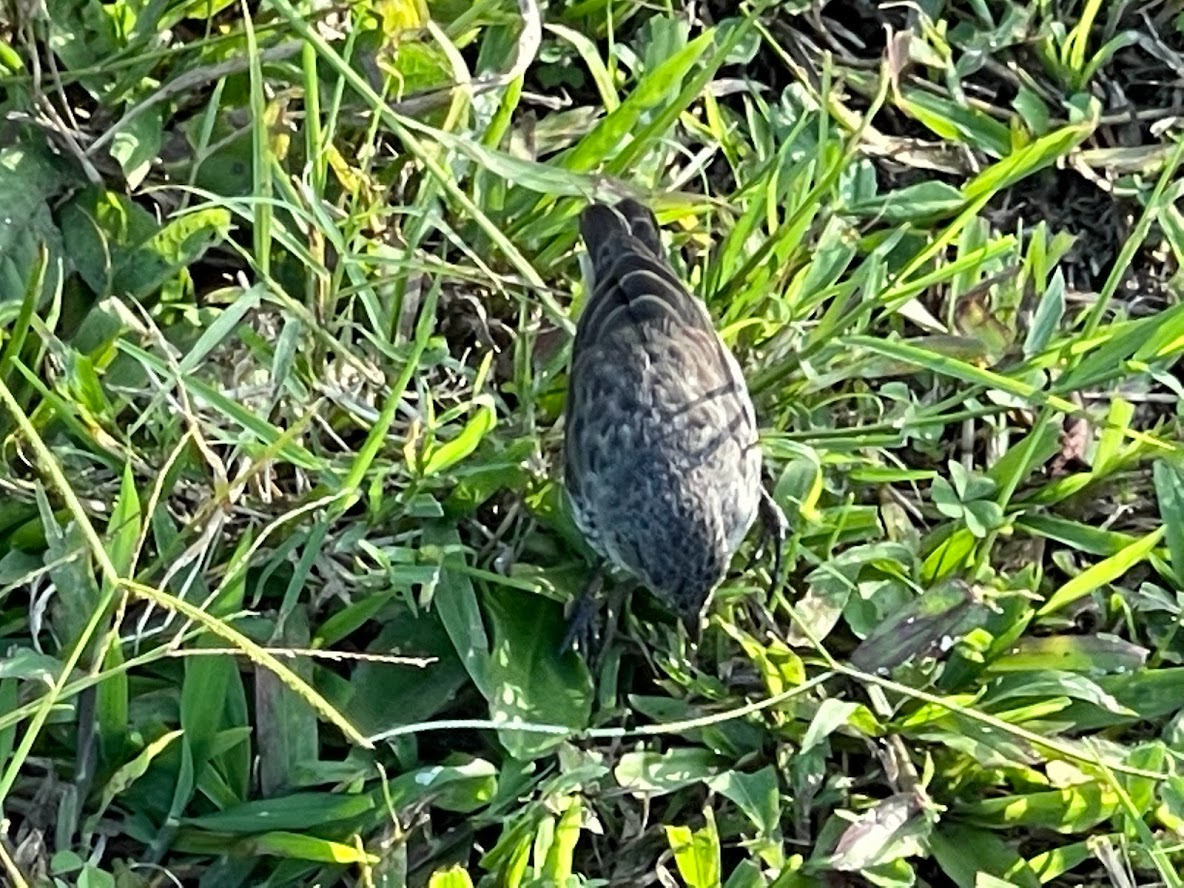 It was Mike’s birthday that day and we had a small impromptu birthday celebration at a bar/restaurant near the entrance of the park. I also bought a small tortoise from a souvenir shop near the bar.

We took the bus back to the harbor around 5 and the zodiac back to the boat. It was cool to see the sea lions just chilling on the pier. They are such a frequent sight that after a while you don’t even pay that much attention anymore, other than to make sure you don’t step on them. The rest of the evening was mostly chilling, reading and relaxing. Overnight, the boat traveled to Genovesa island and turned on its big engine which was MUCH louder than whatever the boat had been using until that time. The sound of the engine made it a quite difficult to sleep..