Sullivan bay features extensive lava flows as recent as the last quarter of the 19th century (meaning they didn’t exist when Darwin visited the Galapagos in 1835!). The area is covered by Pahoehoe lava flows (in Polynesian language, Pahoehoe means “easy to walk”); this type of lava is rare in the rest of the world but common to the volcanoes of the Galapagos Islands and Hawaii, as they share the same volcanic origin. The book about Galapagos volcanoes had an interesting description of Pahoehoe and the second type of lava flows called “aa” (which we saw later in the trip on the Sierra Negra volcano). Pahoehoe lava is characterized by a smooth, billowy, or ropy surface, while “aa” lava has a rough, jagged and spiny surface. Basically, you can walk on Pahoehoe lava bare-footed, while doing so on aa lava would be very painful.

We could easily see the path of lava flow from a distant volcano in the center of Santiago island, as well as the various igneous rock structures such as lava tubes formed from varying rates of flow, temperature of formation and pressure. We also saw pioneer cactus and “hornitos”, little ovens formed when bubbles escape from hot lava to form mini-volcanoes.

After the hike, we went snorkeling in the beach nearby. The contrast between the almost lifeless land above and the sea teeming with life was just crazy. The highlight of the snorkeling was the sighting of a dolphin darting through the water and a sea turtle lazily swimming around (see videos below)

After snorkeling, we rode the zodiac back to the cruise boat and enjoyed a ceviche making demonstration by a chef and had ceviche followed by lunch.

After lunch, we did a dry landing on Bartolome island, a small volcanic island located at the center of the archipelago. A 1.5 Km hike to the top of the island offers incredible views of lava plains with scattered volcanic cones and panoramic views of Santiago and other islands nearby. On a clear day, more than ten islands can be spotted from the top of the viewpoint. You also get nice views of Pinnacle Rock, located on the northern side of the island, right next to a beautiful peach-color sand beach. 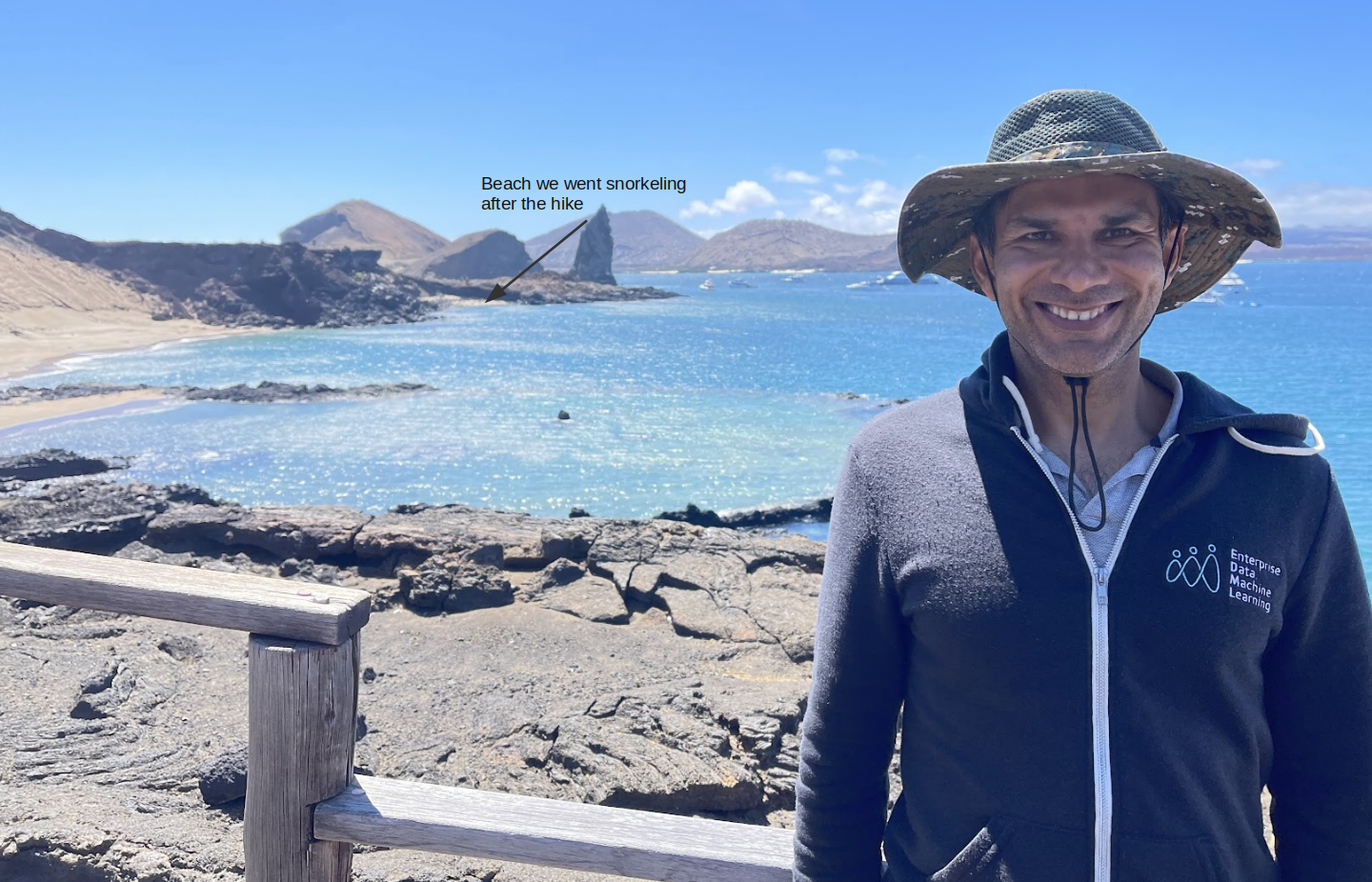 After hiking, some of us went swimming/snorkeling at a beach near Pinnacle rock. This area holds a well-deserved reputation of being one of the best snorkeling places in the Galapagos because the clear and calm water is teeming with fish. The highlight was seeing Galapagos penguins perched on a rock near Pinnacle rock. They are so cute! You may wonder what penguins are doing in an equatorial climate. According to this, Galapagos penguin is the only species of penguin found north of the equatorial line. Additionally, it is the only species of penguin that resides in the Galapagos Islands. The reason this bird can survive in this location is thought to be due to the Humboldt Current which brings cool waters to the Galapagos Islands. It is believed that the penguins got to the islands from southern Chile, carried perhaps by a storm or debris riding on strong ocean currents. The penguins adapted to survive in their warmer environment, losing fat and reducing in size. The Galapagos penguins are only 5.5 pounds and 19 inch long on average (compare with adult emperor penguins, which can weigh 50-100 pounds and are ~45 inches) 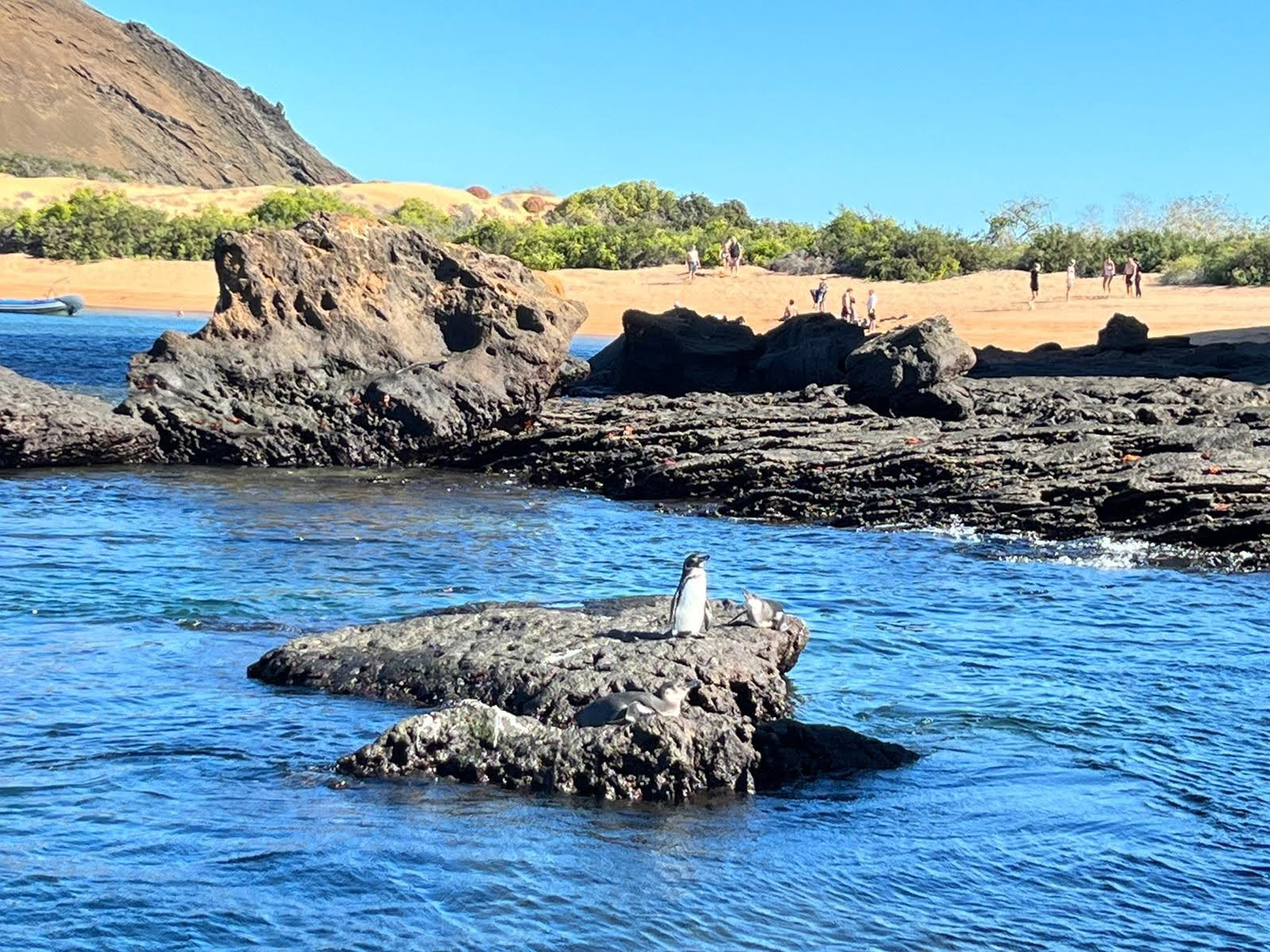 We had another special dinner to celebrate Christmas and our last night on the cruise that night. The full crew – the kitchen staff, engineers and captain also joined us for dinner. 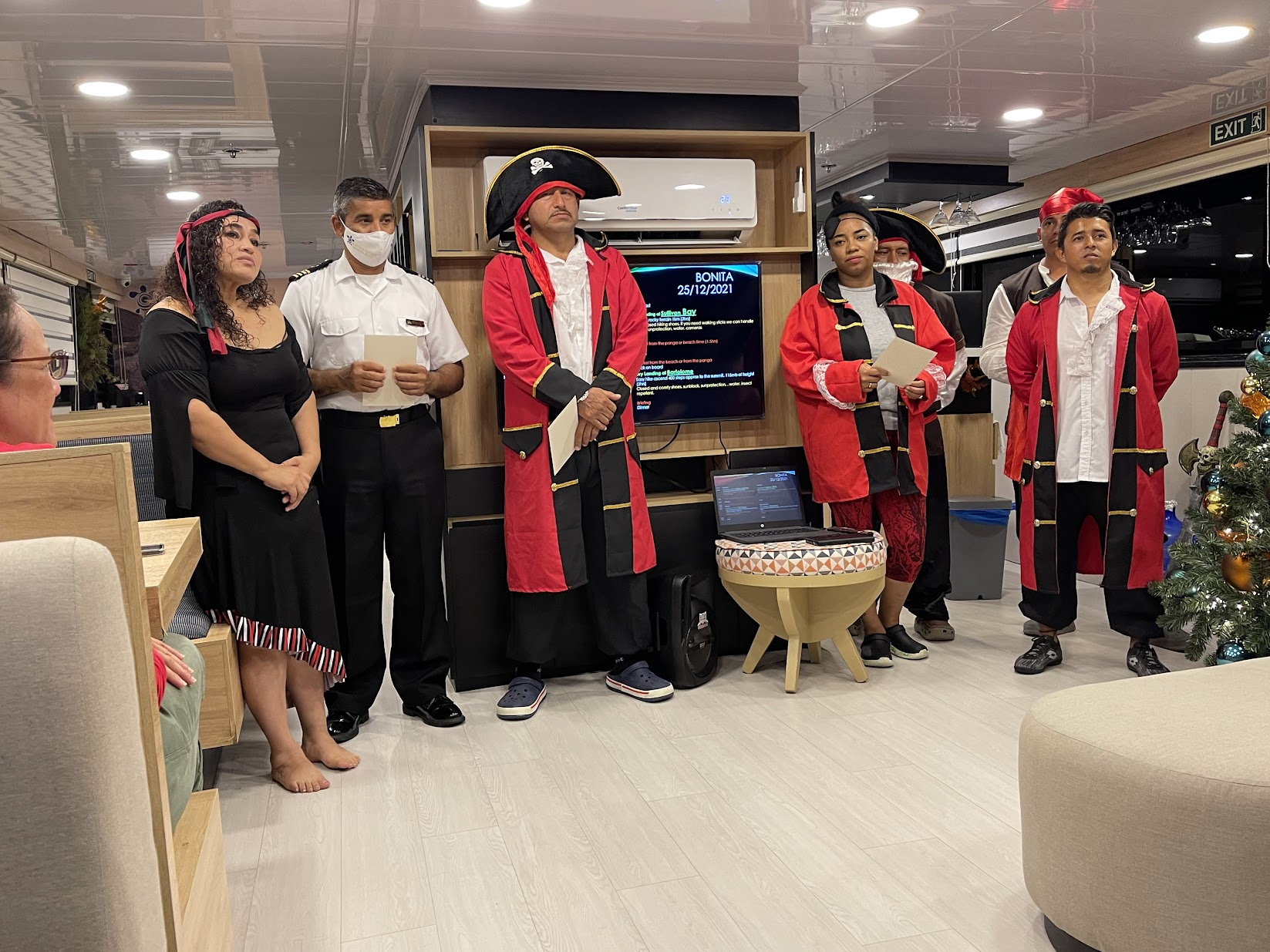