On day 3, we departed for the Baltra airport on Baltra island near Santa Cruz island in the Galapagos archipelago to begin our cruise. We got up at 5:45 AM in the morning and Daniel picked us up and dropped us to the Quito airport. At the airport, we were met by another guide who helped us with getting a boarding pass and getting our luggage checked. Flying to Galapagos is a tad more complicated than normal. They screen the baggage to make sure passengers are not carrying seeds, animals or anything that might introduce foreign lifeforms to the delicate ecosystem of Galapagos. We also met a few other people on our cruise. Our total flight time to Galapagos was around 3.5 hrs, with a brief stop over in Guayaquil (with no change of plane).

As we approached Baltra airport and the plane descended below cloud cover, we started seeing some fantastic aerial views of Baltra and Santa Cruz islands! In fact, if I go to the Galapagos islands again (which I likely will at some point), I’ll look into chartering a plane and flying around the archipelago. At the airport, our luggage was scanned again for organic materials and we were given the option to have our passport stamped.. Galapagos islands try to pretend they are a separate country from Ecuador! We also had to pay a $100 fee to enter Galapagos islands, which had to be paid in cash (so carry enough cash!)

Our cruise trip guide met us outside the airport and gave us instructions on what to do next. To get to the cruise ship, we first boarded buses that took us to the Baltra island ferry station. We then boarded a zodiac dinghy that took us to our cruise ship that was parked between Baltra and Santa Cruz island. 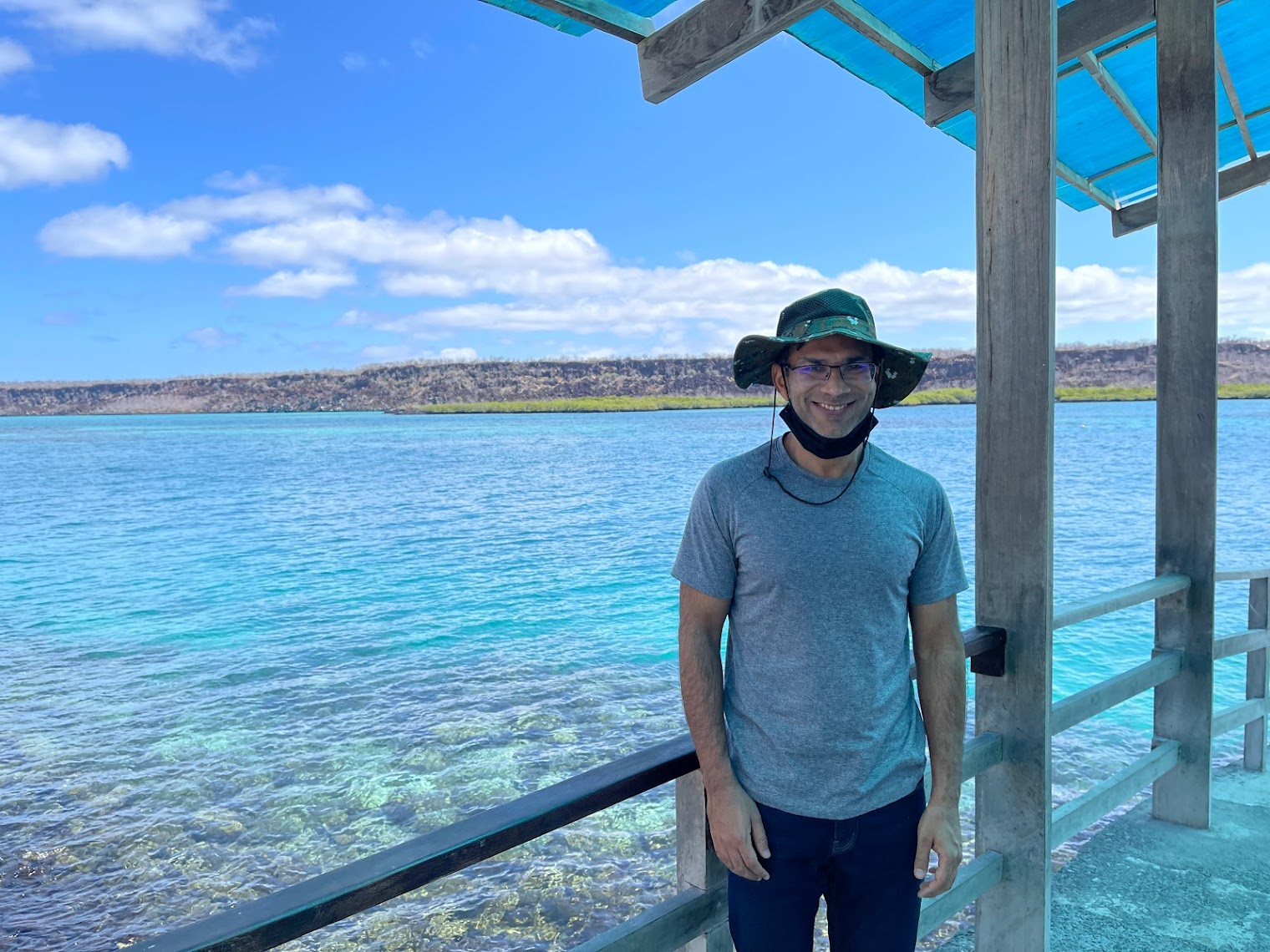 Our cruise boat is called Bonita. It is about 30 years old, but received a total overhaul about 2 years ago. Once aboard, the crew introduced itself and we had a delicious lunch, consisting of chicken leg, two types of salad, swordfish, steamed vegetables and rice. We had ice cream for dessert. Alcoholic drinks were available for purchase. Unlimited coffee and tea were available all day. After lunch, we watched a short video about the cruise ship and were given our room numbers. Our luggage had already been transferred to our rooms. Our group consisted of 9 people, although the boat had a capacity of ~20. There were around 10 crew members on the boat.

Our room had two comfortable double beds, a small closet, electric power outlet and private bathroom. Overall, I was very happy with the food, overall comfort level and the quality of accommodation.

After lunch, our cruise headed towards the Plaza islands on the East coast of Santa Cruz island. These are a group of two small islands renowned for the large number of animal species and extraordinary flora. South plaza island is just 0.13 km2 and a maximum altitude of 23 metres; North Plaza Island is a bit smaller and only used for research. Visitors are prohibited.

To get on shore South Plaza island, we transferred to our dinghy and made a “dry landing”, meaning that we were able to step off the dinghy on the shore without getting our feet wet. As soon as we got onshore, we were greeted by a whole bunch of see lions swimming in the water next to the island, and walking on the rocks rotating their back flippers under their body, and swaying from side-to-side, as sea lions do. Everyone on the cruise erupted into oohs, aahs and wows. After we had taken enough pictures and recorded enough videos of the sea lions, we started noticing the other animals nearby – Sally Lightfoot Grapsus crabs, swallow-tailed gulls, yellow warblers, prickly pear cactus etc. 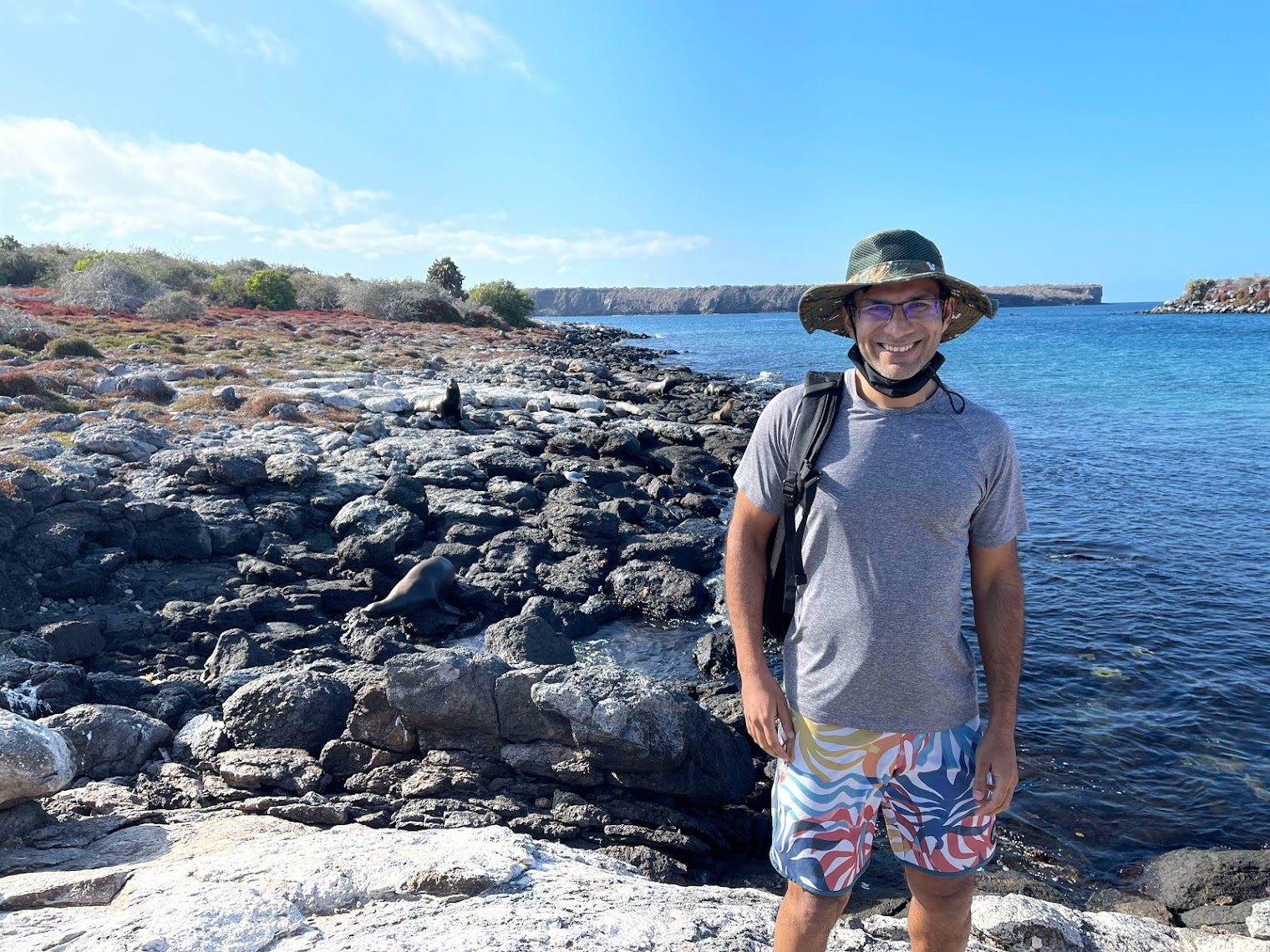 The island is shaped like a gently sloping wedge with a gentle upward slope starting at water level on the North facing part of island, rising towards the highest point of the island with a sharp drop into the ocean. Unlike most other Galapagos islands that are of volcanic origin, both Plaza islands are formed by the uplifting of the sea floor instead of volcanic activity. The rock near the water are nearly white because of the sea lion and bird poop and other bodily excrement. According to our guide, sea lion poop is white in color because they mostly eat white fish. The ground is covered with a lovely red carpet of the Galapagos Sesuvium (carpetweed) plant, which changes its color from green in the rainy season to red and purple in the dry season. Massive Opuntia cactuses, also known as giant prickly pears, grow abundantly on the island. Parts of the island more sheltered from the wind are covered with denser and more varied vegetation. 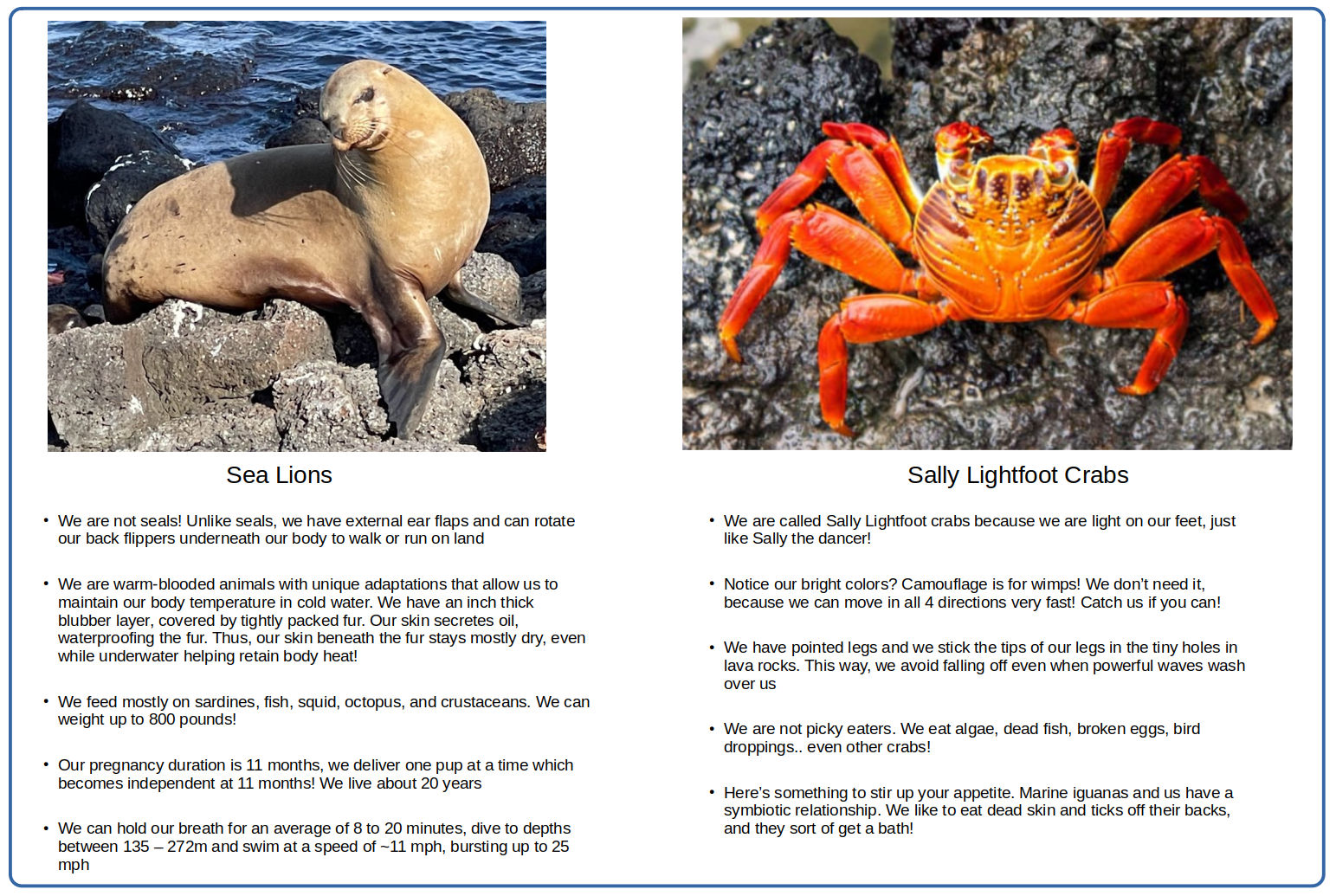 As we made our way along a rocky path around the island, we saw several other species of animals – lava lizards, marine and land iguanas, swallow-tailed gulls, yellow warblers and masked boobies. Given the island’s small size, the territory of the marine and land iguanas overlap and the Plaza islands are the only places in Galapagos where hybrid iguanas can be found (although we didn’t see any). Since the land iguanas eat the young cactus plants, the Galapagos National Park is making an effort to plant and protect young cactus by installing cages around the cactus plants to protect them when they are the most vulnerable. 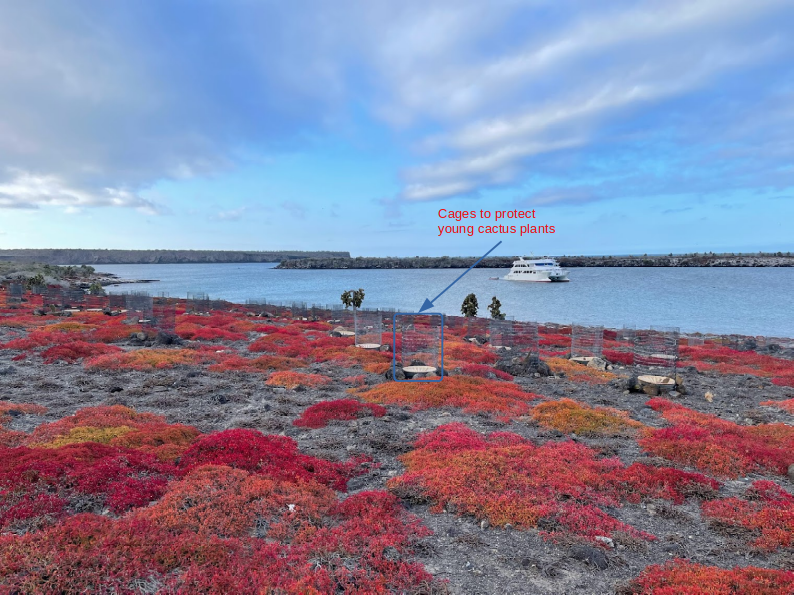 It took us about a hour and half to walk around the island and we thoroughly enjoyed every minute of it. It felt like walking through a menagerie where the animals have no fear of humans!

After the tour, we took the zodiac back to our cruise ship. I relaxed a bit and we had dinner around 7, consisting of Spaghetti, tomato sauce and cheese + ice cream. I had also brought a couple of books about English history, one about the Plantagenets, the dynasty that ruled England since the Norman invasion and another one about the war of the Roses, a series of civil wars fought over control of the English throne in the mid-to-late fifteenth century, fought between supporters of two rival claimants to the English throne. The war of the Roses ultimately resulted in the Tudors coming to power. Before dinner, the tour guide gave a quick lesson on how to put on life jackets and where to assemble in case of an emergency on the boat.

It was an amazing but long day. I went to bed around 9:30 PM and slept really well.