On day 2, we did a road trip to laguna Coicocha, driving north of Quito, passing through the cities of Cayambe, Otavalo and Cotacachi. These are small cities (population 35-40 thousand people) with a significant indigenous population descended from the pre-Inca tribes that lived in the region prior to the Inca and Spanish conquest. Cayambe’s indigenous people of today are descendants of the pre-Inca Kayambi people, Otavalo’s population is descended from the indigenous Otavalo people. They are famous for weaving textiles, usually made of Alpaca wool, which are sold at the famous Otavalo market. Otavalo region has rich volcanic soils and used to be made up principally of farming communities. With the growth of tourism, the town has begun to focus more on the making of handicrafts. According to our guide, people from Otavalo have also had notable success selling their goods abroad. We stopped at the Otavalo market along the way and I ended up buying a couple of paintings showing Ecuadorian landscape, a blanket, scarf and llama figurine made of alpaca wool. 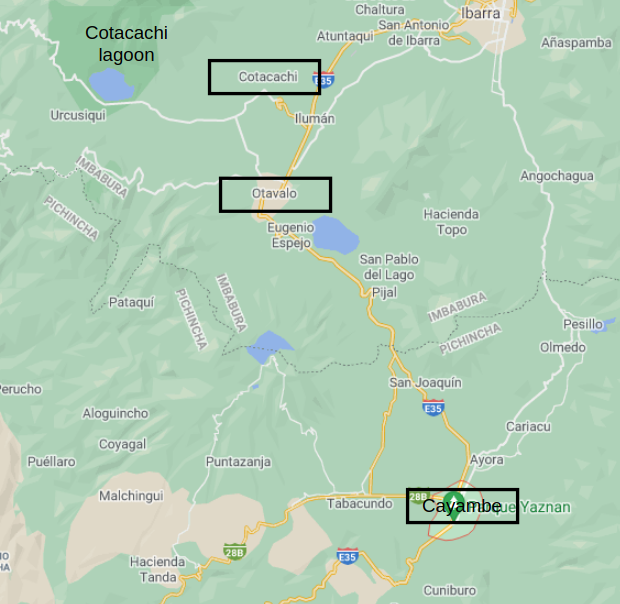 As Otavalo is famous for its textiles, many of the nearby villages and towns have specialized in their own particular crafts. Cotacachi, for example, is the center of Ecuador’s leather industry. Cotacachi was a stop on our itinerary, however neither Mike or I are particularly interested in leather, so we requested our guide Daniel to just drive through Cotacachi and spend more time at the laguna Coicocha, a fresh water lake in a volcanic crater which was the final stop of our itinerary.

I was expecting Otavalo and Cayambe to look “more traditional” however the urban landscape looked a crummier version of Quito with lots of small shops selling electronics, souvenirs, textiles etc., stuff you’d see in any small town in a middle income country. According to our guide, there aren’t many houses from the colonial period, because the quality of construction was poor and colonial era houses didn’t survive the regular earthquakes that hit the region.

On the way to Otavalo, we passed by lake San Pablo with imposing views of mount Imbabura behind it.

We saw several rose farms along the way. Rose is one of Ecuador’s main exports. Roses are grown in large greenhouses which are lit by red/yellow lights during the night to keep production going.

After the indigenous market tour in Otavalo, we had lunch at a hacienda – a large plot of land granted to Spanish upper classes in Colonial times. The food and service was excellent, a band was playing traditional music and we got to walk around the lovely garden behind the house and see some horses and ducks. Our tour company did an excellent job picking interesting lunch/dinner places and making reservations; there is no way we would have known of such a place on our own! 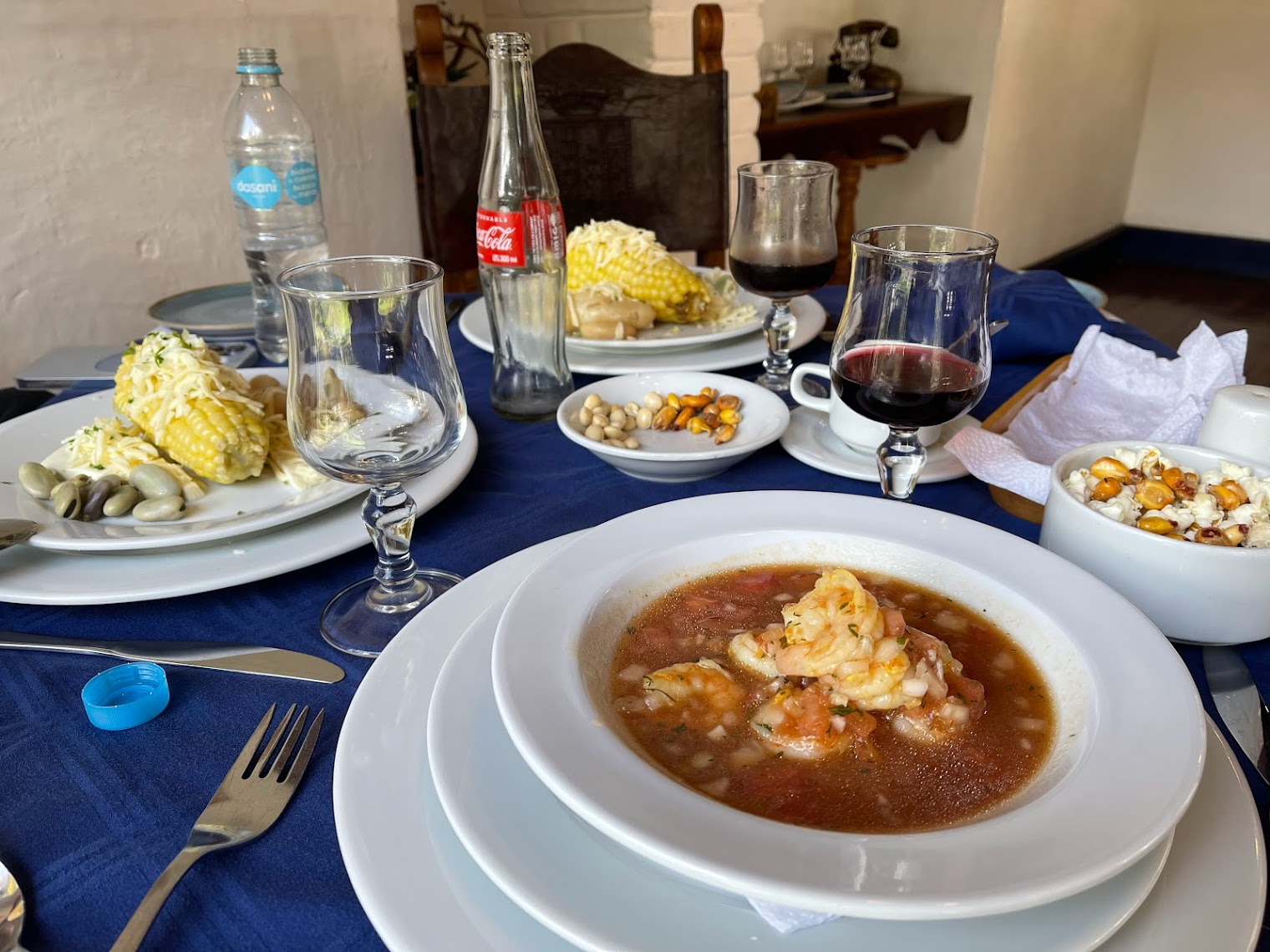 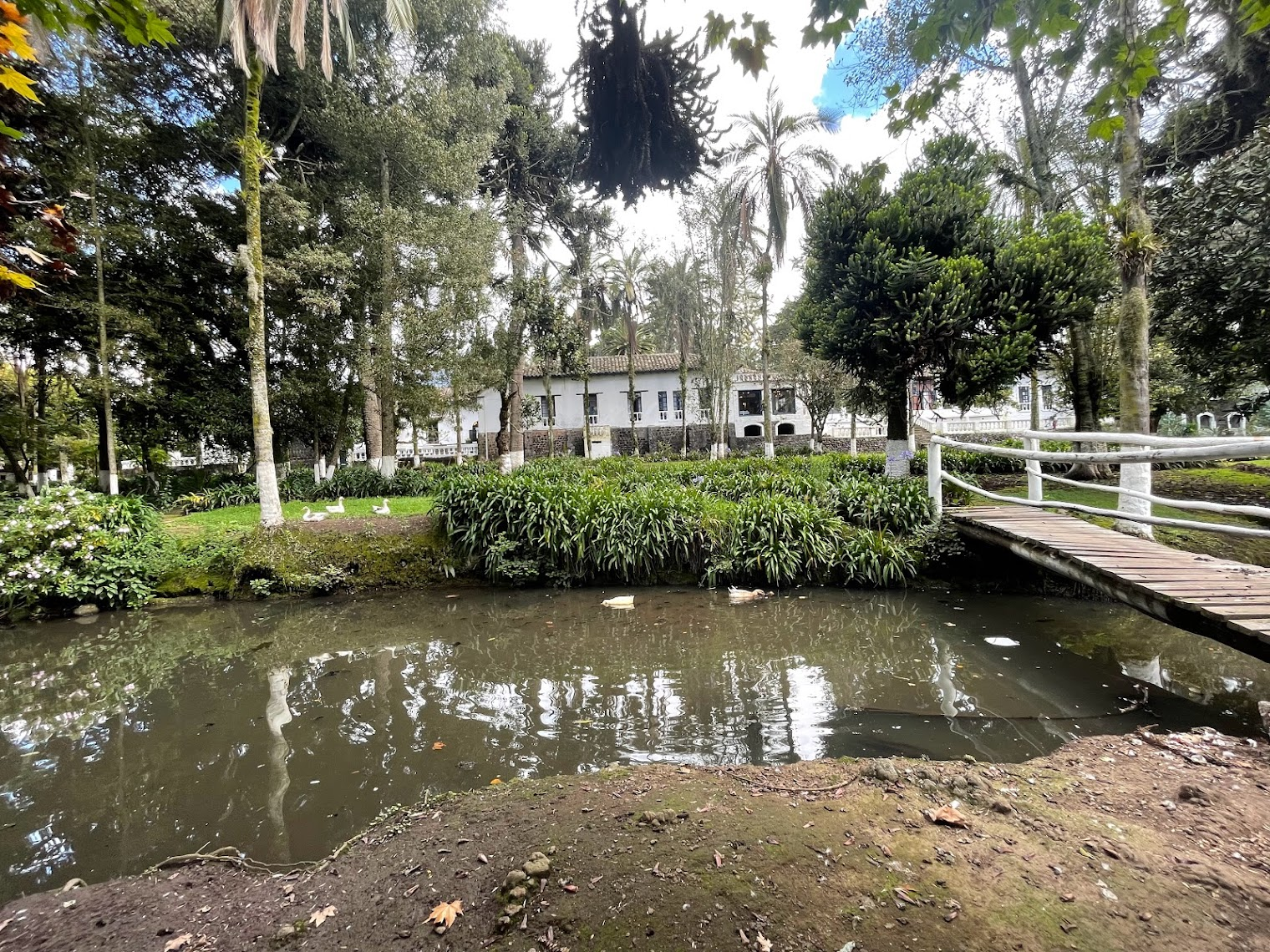 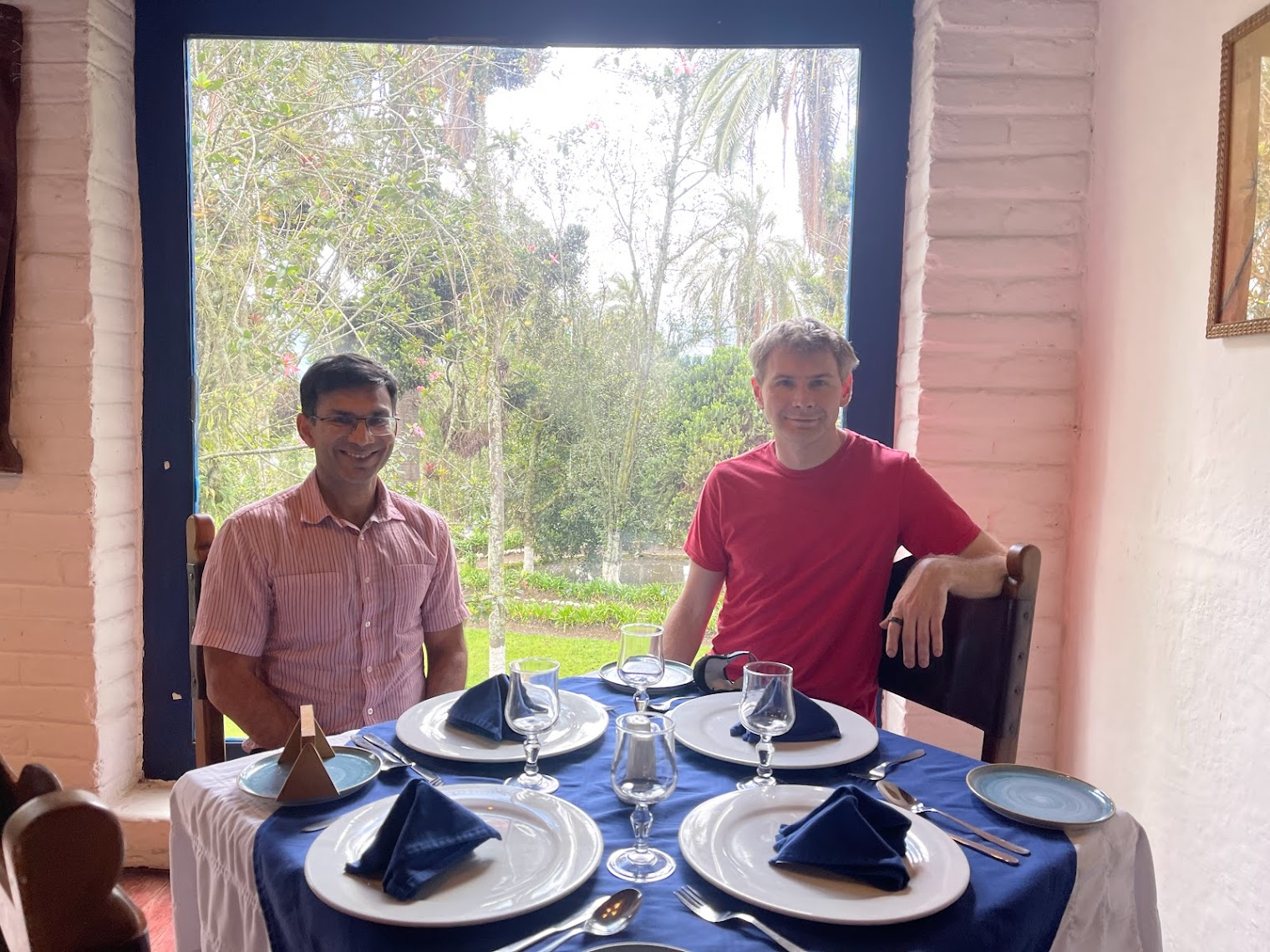 After lunch, we drove through the city of Cotacachi to laguna Coicocha, a fresh water lake in a volcanic crater. The views of the lake encircled by the steep, lush green crater walls were stunning.

Our guide told us about a trail that runs along the edge of the crater, all the way around it. It takes about 7 hours to walk the trail. Something to do next time! 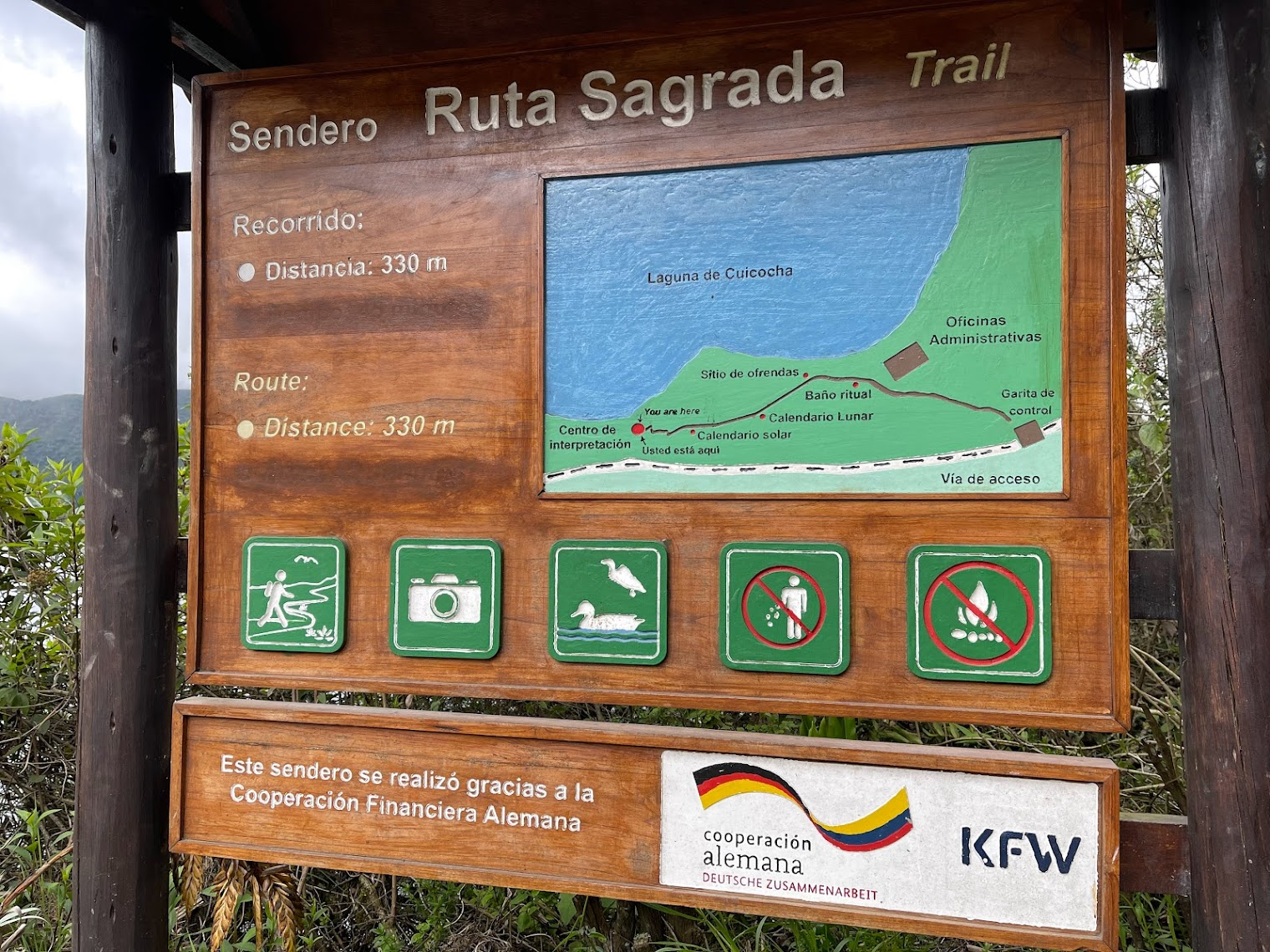 After the boat tour, we had coffee at a small resort near the boat station. The resort features a small restaurant and hotel. It felt very zen like sipping coffee enjoying the gorgeous views of the lake and mountains nearby 🙂 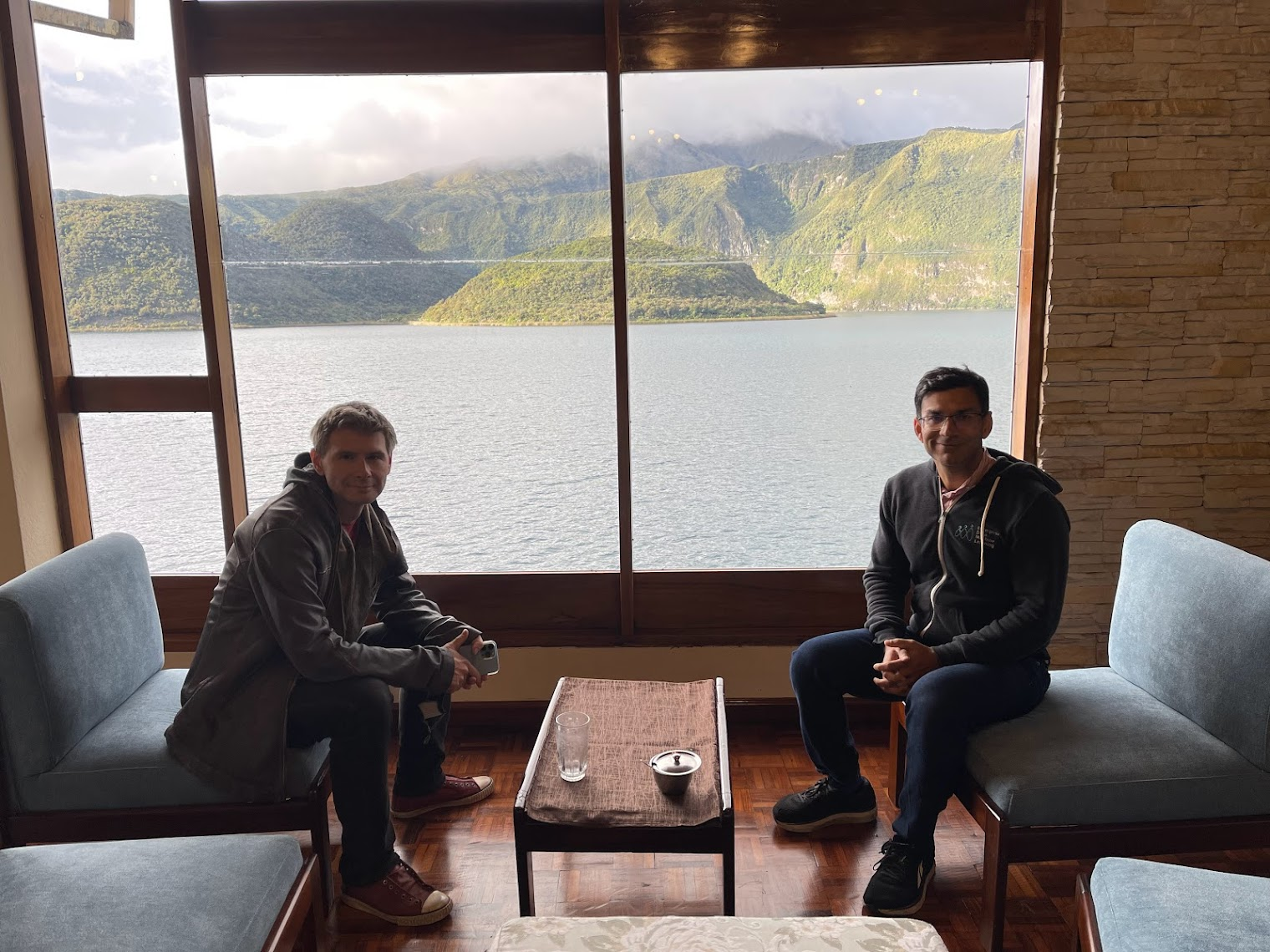 We drove back to the hotel after the lake excursion and arrived back rather tired. We had a variety of interesting experiences, but also spent a lot of time on the road because of the slow traffic on the windy, mountainous roads.