The boat traveled from Santa Cruz to Genovesa island overnight, a distance of roughly 90 km. When we got up in the morning, we were anchored in Darwin bay, next to Genovesa island. Genovesa island occupies about 14 square kilometres (5 sq mi), and its maximum elevation is 64 m (210 ft). The horse-shoe shaped island has a volcanic caldera whose wall has collapsed, forming the Great Darwin Bay. This island is known as Bird Island, because of the large and varied bird colonies which nest here. There are an abundance of frigate birds and it is among the best place in the Galapagos to see red-footed boobies, Nazca boobies, swallow-tailed gulls, Darwin’s finches, and Galápagos mockingbirds. 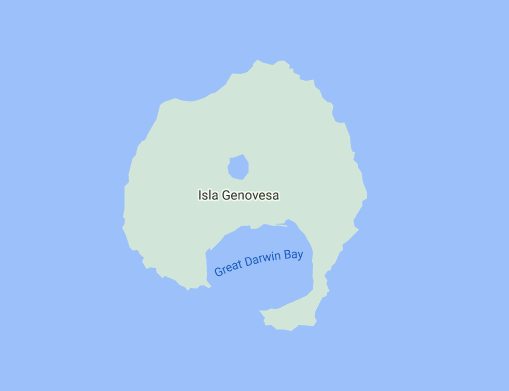 We had a day full of activities, so we got off to a slightly earlier start than usual. We had breakfast at 7 AM and by 8 we boarded the zodiacs to make a wet landing on the shores of Genovesa island. Wet landing means getting off the boat in the water and walking a few steps to the shore.

As soon as we got on the beach we started seeing birds flying overhead, perched on trees or just walking around on the sandy terrain – frigates, swallow-tailed gulls, red-footed boobies, mocking birds, large brown finches, a yellow night heron and a couple of marine iguanas. The black volcanic rocks around us looked nearly white, thanks to all the bird poop splattered across the rock face.

The birds have no fear of humans and you can walk right up to them and they’ll pay you no notice. It was really cool to see the birds engaging in their natural behavior – I saw a red-footed booby mother feeding its young, several birds grooming their feathers and and two birds engaged in what looked like a beak fight. 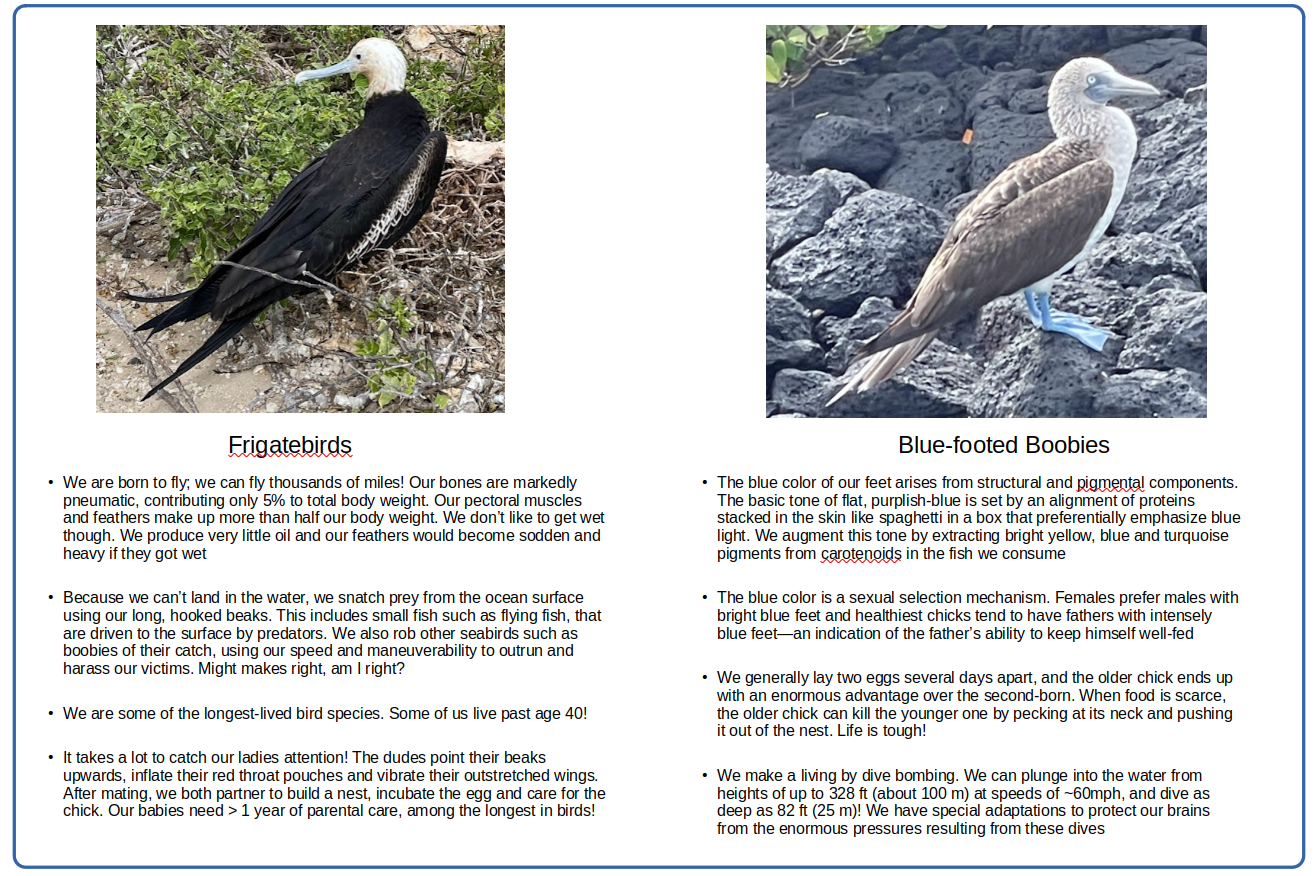 From the beach, we followed a roughly 1.5 km trail along the shoreline. The walk was an ultimate wildlife experience as it was full of animals. 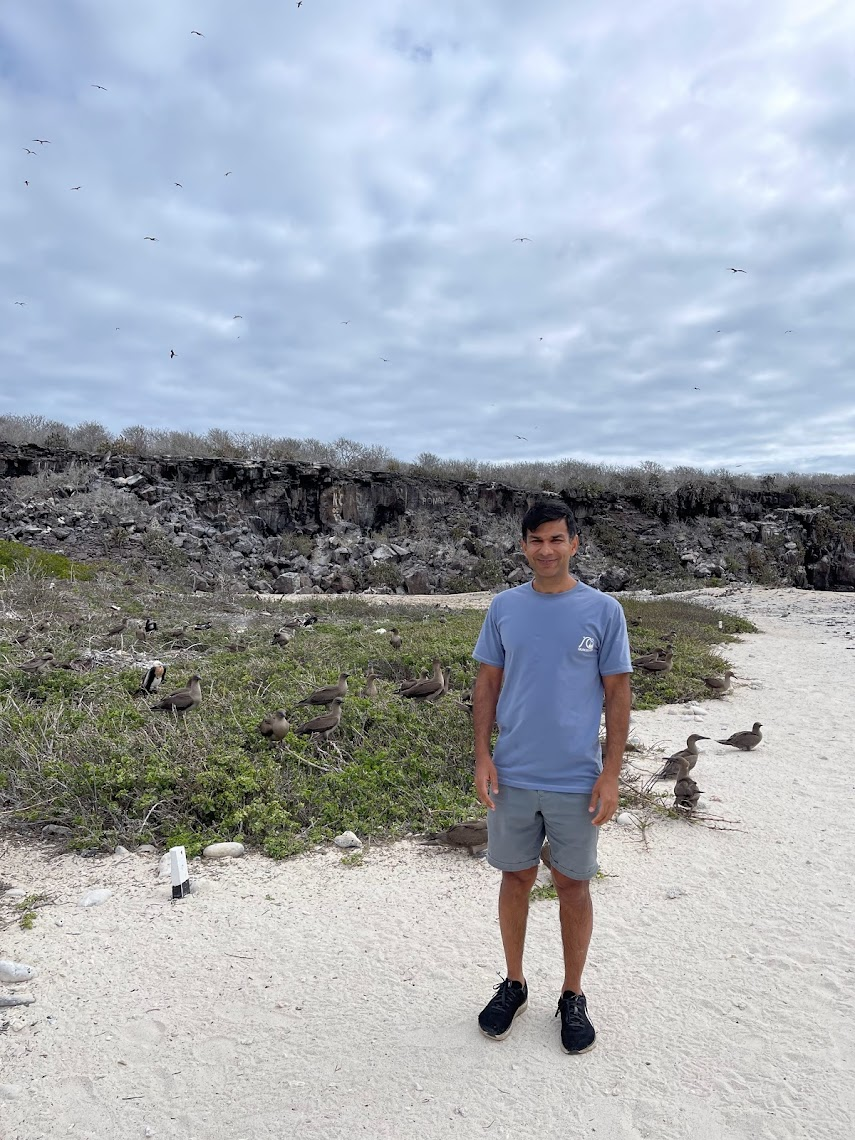 We ended our hike in a spot overlooking Darwin bay, surrounded by cactus and palo santo plants. If you scrape off the bark from a palo santo plant and rub your finger on the green part underneath, it gives off an aroma reminiscent of baked apples or burnt sugar. Because of this property, palo santo is used in aromatherapy and as a type of incense. I was strongly tempted to break off a small twig and bring it with me, but I didn’t want to run into trouble at the airport while leaving the Galapagos islands, where your luggage is scanned for any organic material.

After the hike, we took the zodiac back to our boat, were treated to some excellent chips and guac.

Our second activity of the day before lunch was snorkeling in a nearby cove. We donned our wet suits and snorkeling equipment (all provided on the boat) and boarded the zodiac to a spot near the cliffs about 500 m away. I love the way snorkeling transports you instantly into a whole new world, as soon as you duck your head under the water. It was fascinating to see several species of multicolored fish swimming around. Because of the angle of the sun, a column of sunlight was shooting deep into the blue-green water, pulsating with the movement of the water and illuminating everything in its way in a whitish glow. The sight of the morning was undoubtedly several 3-4 feet sharks swimming right below us. I had never seen sharks swimming in their natural habitat, and was blown away by their graceful movement and sleek and elegant design.. mother nature is truly wonderful! I really wish I had an underwater camera! Some people in our group did and I’m hoping one of them caught the sharks swimming.

After the snorkeling trip, we had lunch and did another excursion to the same area where we went snorkeling earlier. This time we dragged a two-person kayak, stand-up paddle board behind the zodiac and also took snorkeling equipment with us. This way people could do whichever activity they were interested in. I first went snorkeling and saw a few sharks again and then got on the kayak and paddled back to our boat. It was a ton of fun!

Around 4, we took the zodiac to El Barranco (Prince Philip’s steps), a steep path that leads through a seabird colony in a thin palo santo forest, leading up to a rocky plain formed of relatively new lava flow. 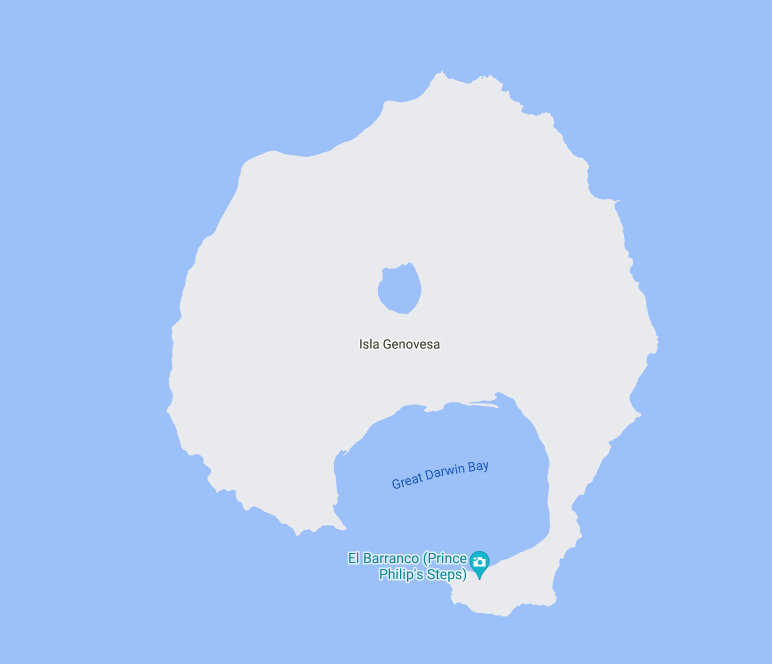 We climbed a few steep steps to do a short hike around the island. Genovese is really a bird lovers paradise. There were birds everywhere. On the ground, flying overhead, nesting in the palo santo trees. Sounds made by males and females of different bird species can be quite different. For example, male boobies make a shrill, whistling sound, while females honk, sounding like a goose. It was cute to see bird families with young birds of varying ages – from 2-3 days old to almost ready to fly. Baby boobies are covered by fur when they are young and this fur gradually comes off as they get older.

The vegetation gets sparser higher up along the path. The part of the island facing away from Darwin bay caldera consists of a lava plain that slopes into the sea. We saw a few pioneer cactus plants on the lava plain, but otherwise it was devoid of vegetation. We also saw an owl, that was well camouflaged against the reddish-brown background.

This being Christmas eve, the crew prepared a fancy dinner that night. It all felt very relaxed, homey and cozy. After dinner, a few of us got a tour of the boat’s engine room. 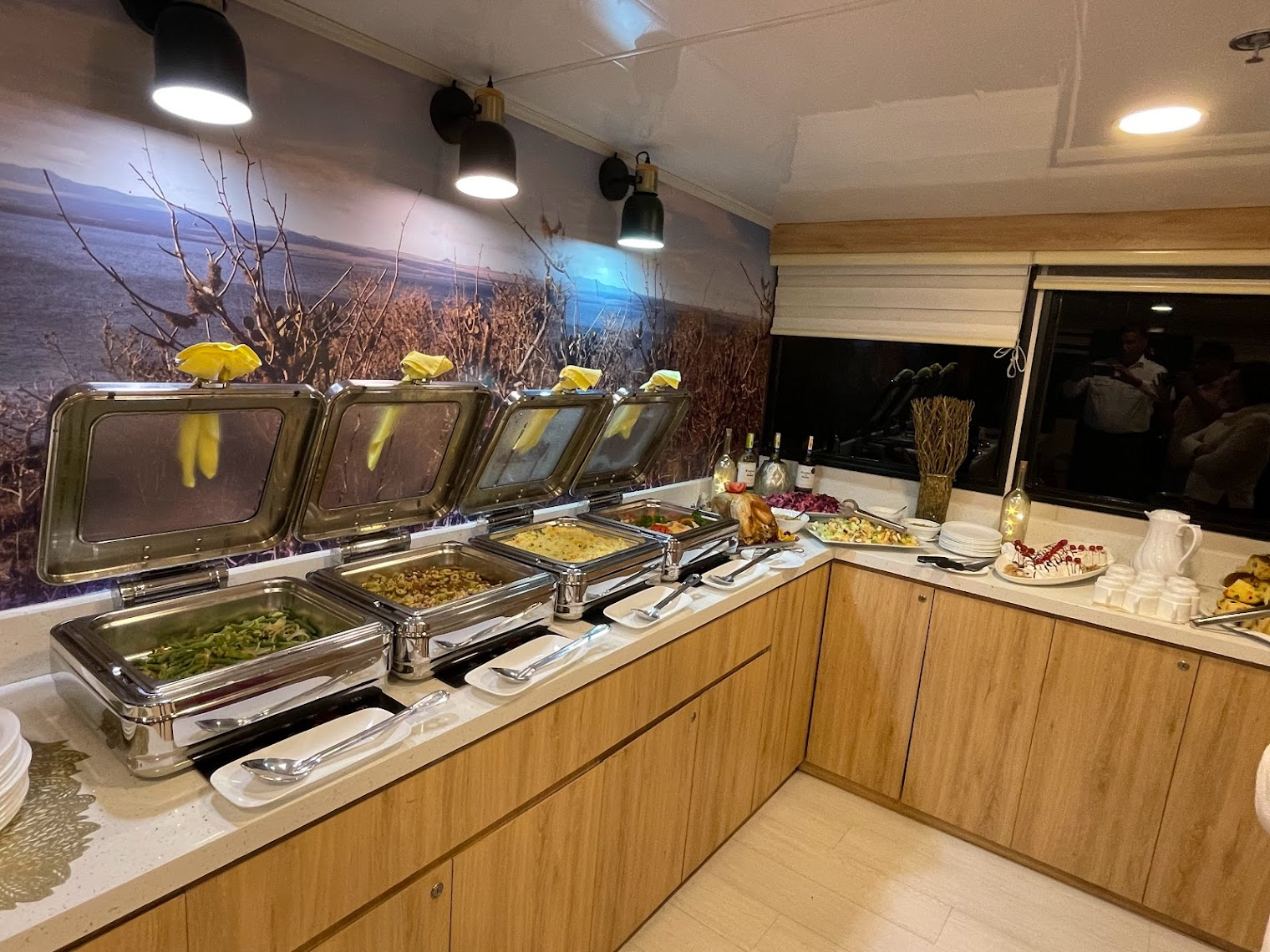 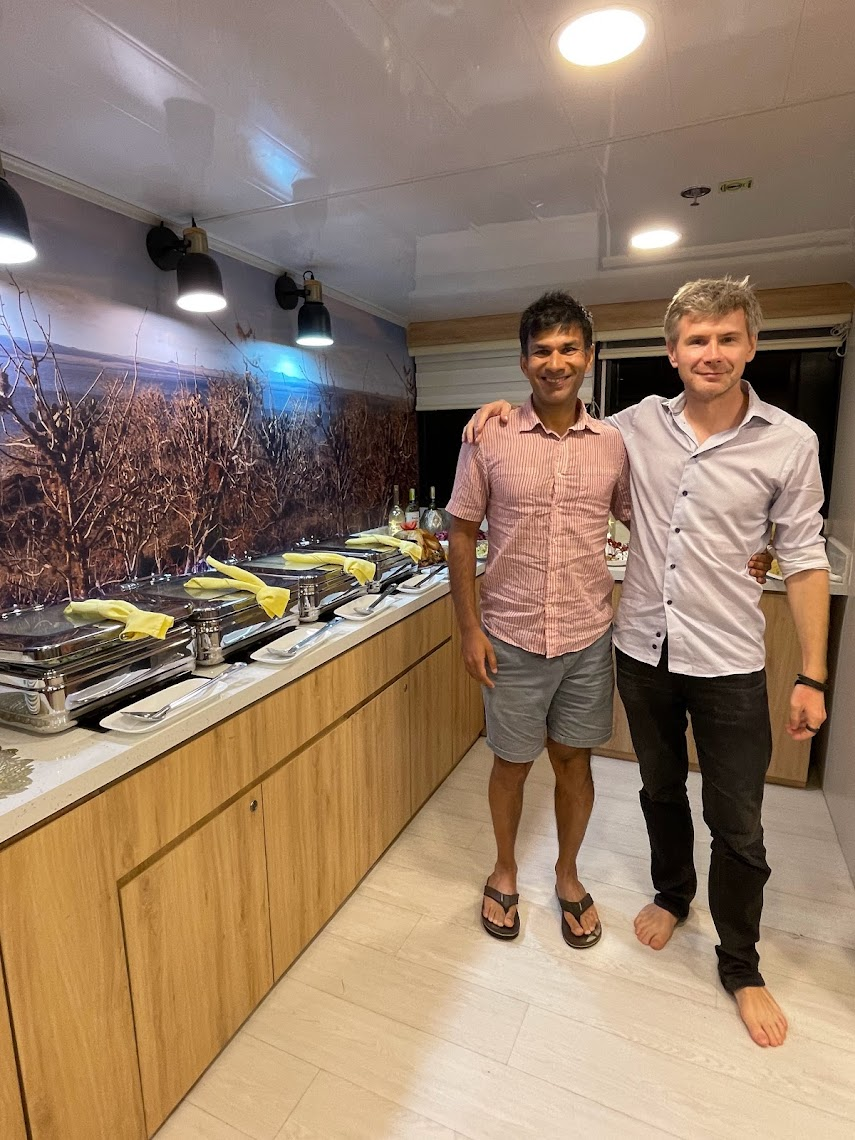 During the night, the boat made its way to Santiago island for our last full day of activities. The boat was traveling both against the current and the wind and seas got pretty rough. I finally had to use my motion sickness patch and it helped a great deal. If you are prone to motion sickness, I highly recommend bringing one!