In this post, I’ll describe the highlights of the OBX trip (that I’m currently on, hence the present tense) with my friends Haley and Tom.

I drove down separately Friday morning around 10 am. Once I got on the highway, the Tesla pretty much drove itself.. It felt almost as if I was a passenger rather than the driver. The system is by no means fully autonomous – it requires you to pay attention to the road and be ready to take control at any time. It ensures that you are paying attention and not dozing off by requiring you to apply a slight pressure on the steering wheel every 15-20 seconds or so. If you fail to do so, the system will remind you through visual followed by audio alarms of increasing urgency. That said, the driver doesn’t need to continuously make minor adjustments to the steering and speed to follow the road, and that saves a significant amount of effort.

Range anxiety is another common concern with EVs. However, Tesla superchargers have turned that one into an anachronistic concern. I made two supercharger stops along the way.. In 15-20 min, one can get ~150 miles worth of charge. By the time you grab a coffee and take a bathroom break, the car is fully charged up, ready to go.

I read along the way that Tesla is ramping up the cost of their full self driving system which features automatic lane changing, self-parking, summoning, stop light and stop sign detection etc., from $7000 to $8000 on July 1. I’m strongly tempted to buy it. My car currently has basic self-driving features, which means the car automatically follows the lane it is on and maintains a safe distance from the car in front, but doesn’t change lanes or stop at red lights.

Also listened to the Economist articles along the way using the audio feature of the Economist app. I found this article about the history of pandemics and how society can be better prepared to handle pandemics quite interesting.

I arrived around 4PM and checked in. Haley and Tom arrived about an hour later. We just took it easy the first day and Haley cooked some delicious Indian food and Tom made some amazing mixed drinks. We chatted until 1AM. One unexpected side benefit of this Covid-19 era is that it is giving us time and space to spend much more time with a few old local friends and invest and nurture those relationships because of the limitations on more casual social interactions which used to consume so much of my time in the pre-covid days. 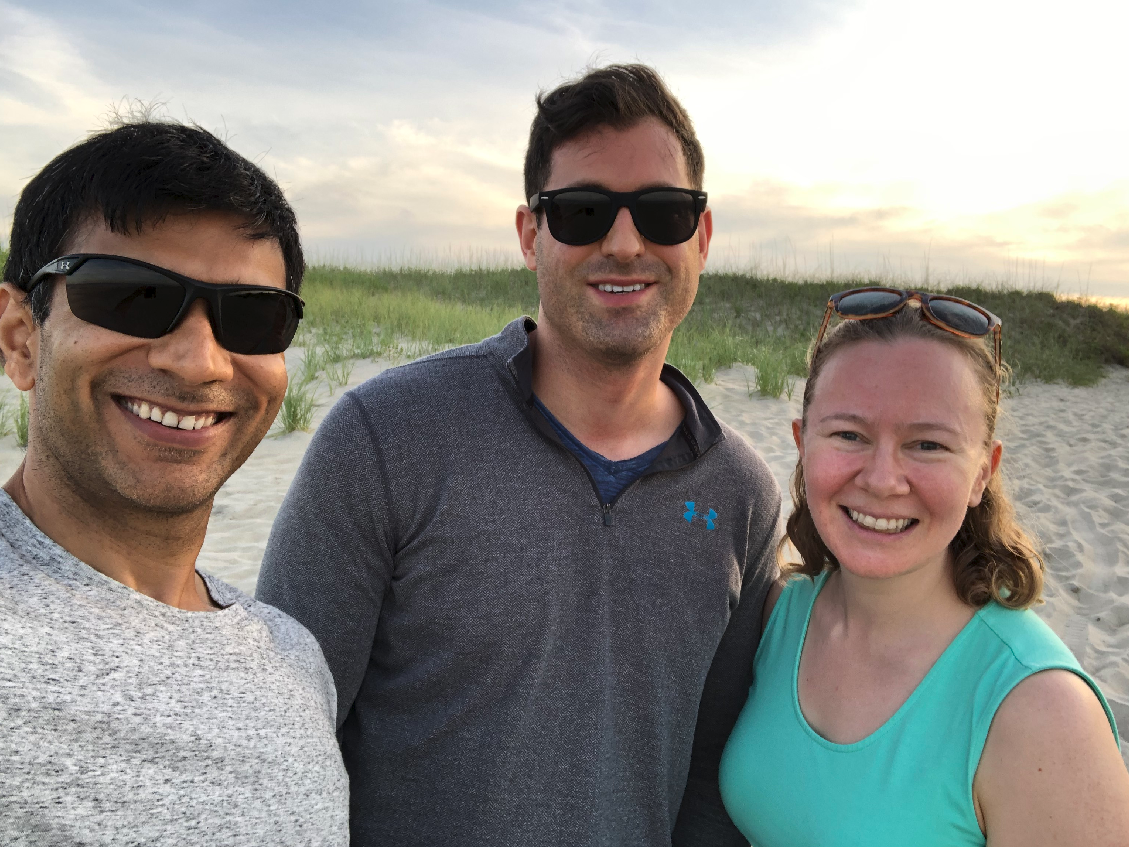 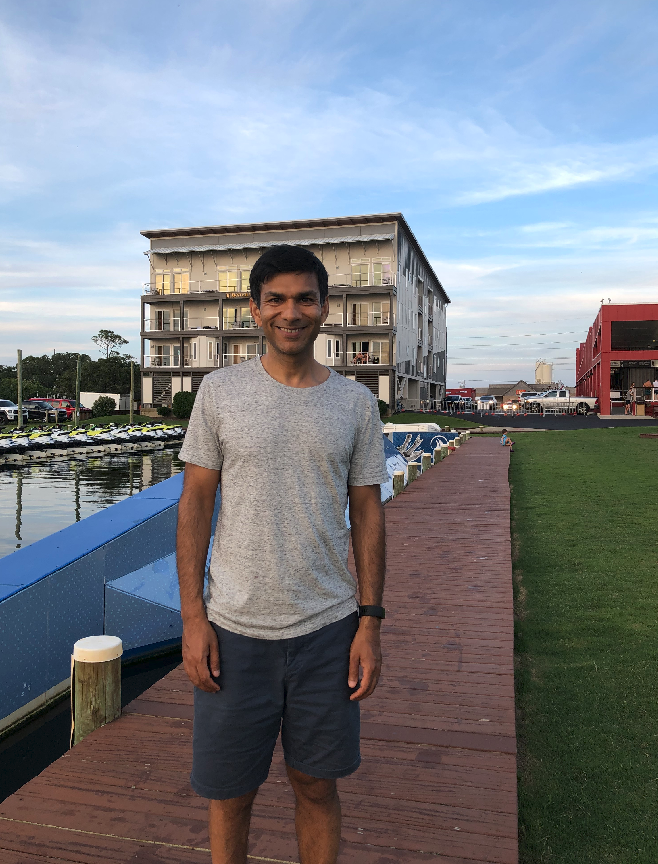 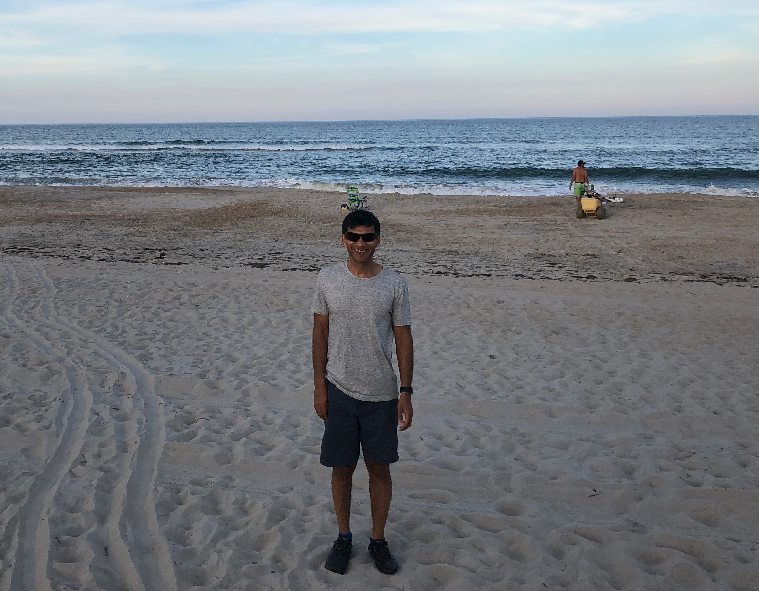 The next morning, I took my newly purchased Bandit (a kite brand) out. I realized immediately after launching the kite that the side lines were unbalanced (one line was shorter than the other). This wasn’t a big enough deal to derail the session but I made a mental note to do something about it after I got out. The wind was light in the morning and I got blown downwind, but I knew that SW winds at the OBX generally pick up later in the day. Sure enough, the wind picked up around mid-day and I was able to make my way back upwind.

After getting back, I got a big meal, rested a bit and then took a look at what was going with my lines. I realized immediately that one of the lines had a knot leading into a loop which shortened that line. With the help of a Real kitesurfing instructor, I tried to unravel the knot, but noticed that the unraveling process was resulting in significant fraying which in turn would weaken the line. Not wanting to fly a kite with weakened lines, I just got myself a new bar and lines. The bar was for a different kite brand, but had the right line endings for my kite’s bridles. I also got new board straps because the existing ones (~10 years old) didn’t work well anymore.

I went out on the water again in the afternoon but barely 5 minutes later, the chicken loop came undone and I had to do a self-rescue. During the self-rescue, the safety leash also came undone somehow and I saw both the kite and the board drifting away from me (you are probably thinking, gosh, I’m never trying kitesurfing again! But trust me, these things don’t happen frequently). Funny the thoughts that run through your mind when you see a few thousand dollars of investment floating away from you. In my case, it was the thought that boy, I really need UAL (United Airlines) stock (that I’ve been day-trading) to go up 10-15% now! But otherwise, I was mostly calm and focused on swimming back to the shore. Fortunately, a Real kitesurfing instructor who was teaching nearby on jet skis came over to help. He got my kite and board back and I dragged them slowly towards the shore. It was difficult at first because my feet barely touched the bottom, but got easier as it got shallower closer to the shore. Once on shore, I deflated the kite, and the kind instructor gave me a ride back to Real. I felt quite thankful to be staying at Watermens and being able to rely on some support from Real instructors.

I was a bit rattled and dejected by all of this, but decided to not let this get to me.  So I straighten up my lines, and went out again. And this time, I had a glorious, trouble-free sunset session. Had a lot of fun jumping over the waves, riding toe side, doing powered turns..

The next day started off as a light wind day. Tom and Haley had signed up for hand-gliding lessons and they went off to do that around 10AM. I made myself some breakfast, and just took it easy. When it looked like the wind had picked up a bit, I went out, set up the kite and got a launch. However there wasn’t enough pull to be able to stay upwind. So I landed the kite and went back to the apartment. Cooked myself some lunch, read some harry Potter and just chilled. A bit later in the afternoon, when it seemed the wind had picked up, I went out again and had an ok’ish session. The wind was nice and clean for the first hour and I practiced some jumps and riding toe-side both ways. I was hoping to work on back rolls, but couldn’t find the courage to do it. I had used the side line length adjustment on the Liquid Force bar to shorten the side lines which made the kite more responsive and quicker to turn. After about an hour, the wind started turning gusty and I happened to catch a lull rather after sending the kite for a jump.. As the lines lost tension, the chicken loop came off again! But this time, I was able to hook back in and salvage the situation. I body dragged back to the board and headed back to the shore to finish the session.

I realized that the reason why the chicken loop kept slipping out was because the spreader bar on my harness was too loose causing the hook to point up. This made it easy for the chicken loop to slip off when there wasn’t sufficient tension on the lines. My harness was ~10 years old anyway and badly in need for replacement, so the next day I ended up getting a new harness, which fits a lot better.

After the session, I wrapped up the kite and got a big sandwich. Haley and Tom returned a couple hours later, having greatly enjoyed the hand-gliding lesson. Tom also got to try his paragliding gear. We cooked a lot of shrimp for dinner that day, along with some salad. Tom treated us to his growing selection of mixed drinks.. When I asked him for the list of ingredients, I found that one of the ingredients is sugar syrup. I asked Tom to not add sugar syrup to my drink and instead add bit more orange (to provide some natural sugar) to balance out the lime and jalapeno. Tom thought the idea was a bit blasphemous, but the end result turned out quite nice 🙂

The last full day of our trip was a very low wind day. I called around for some sailing options, but didn’t find any outfitters renting sailboats anymore. A bit to my surprise, Ocean Air in Avon, where I’ve rented sailboats several times in the past wasn’t renting them anymore. We decided to drive down to the lighthouse in Buxton and spend some time on the ocean side. I dropped the Tesla at the destination charger in Buxton to get some miles. Destination chargers will add ~40 miles/hour, significantly slower than superchargers, but a bit faster than regular EV chargers (~24 miles/hour). It was quite hot in the sun, so we hung out on the beach for a couple of hours and drove back. Tom had to leave that day to attend a workshop the next day.

We cooked beans, tomatoes, salmon/tuna and farro for dinner. A serendipitous discovery that I plan to take full advantage of – creole seasoning works amazingly well with kidney beans! 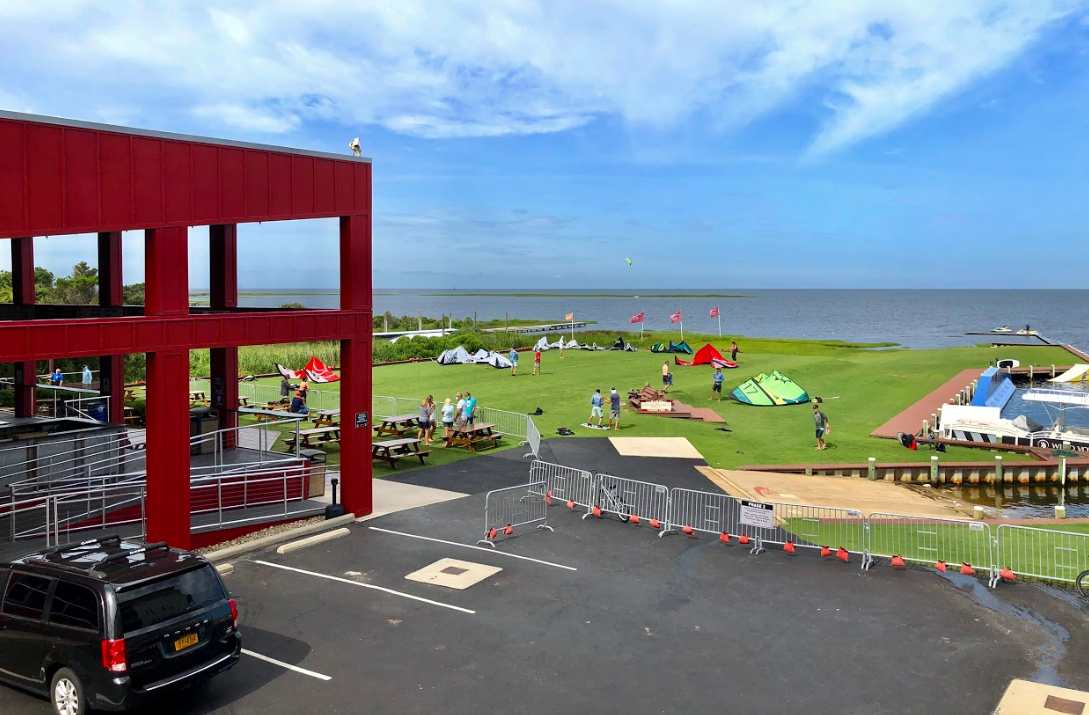 All good things come to an end eventually. So finally, Tuesday morning Haley and I packed up our stuff, took a few more pictures and drove back home. On the way back we briefly stopped at Jockey’s ridge state park (near Nags Head), which according to Haley has shallow water for miles and should be another good kitesurfing spot (mental note for the next OBX trip). We listened to several podcasts along the way – about the asteroid impact that wiped out the dinosaurs (according to the podcast, the demise took place over a very short period – several days, rather than over thousands of years as is commonly believed), the immunological adaptations bats have evolved to resist viruses and a few others.

Overall, we all had a great time and I was glad we stayed at Watermens because I could launch and land right out of their lawn instead of driving to a beach. Having a well-equipped kitchen and a spacious, comfy apartment was also very nice. Cooking, eating and drinking together was a great bonding experience and reinforced our friendships. Looking forward to the next trip!