Notice that steps 2 and 3 are carried out for relevant sentences only. There are 16339099 sentences in the entire corpus. Out of these, only sentences that are marked with the COVID-19 tag and are not fragments or questions and don’t come from sections such as Introduction or Background are considered relevant. This filtering process reduces the number of sentences to be considered during the similarity search to 917986 which reduces storage requirements and speeds up sentence similarity lookup at query time.

Similarly, the BM25 scores are only calculated for important words in a sentence. For example, stop words such as “and”, “but”,  words with fewer than 2 characters etc., are excluded.

Let’s go over each of the three steps in more detail.

Word embeddings are a type of word representation that allows words with similar meaning to have a similar representation. Representing words by learnt embeddings is a fundamental advance in natural language understand and is usually a starting point for most natural language processing workflows. I’ll introduce the basic idea here and then refer you to some papers and articles for more information.

Consider the following similar sentences: Have a good day and Have a great day. We know from prior knowledge that these sentences have a similar meaning. If these are the only two sentences in our corpus, an exhaustive vocabulary (let’s call it V) would be V = {Have, a, good, great, day}.

Learnt word embeddings aim to automatically learn word representations that are compact (usually 128 or 256 dimensions) and can capture the semantic relationship between words. It does so by using a fundamental linguistic assumption called the distributional hypothesis  which states that words appearing in similar contexts are related to each other semantically.  For more info, see the original word embedding paper and the Pytorch example that shows how word embeddings can be learnt in an unsupervised manner from a large corpus of text.

The family of techniques used to calculate word embeddings from a body of text are called “word2vec”. The cord19q ETL system uses a fast and memory efficient implementation of word2vec called FastText.

The flowchart used to create the word embeddings is shown below. 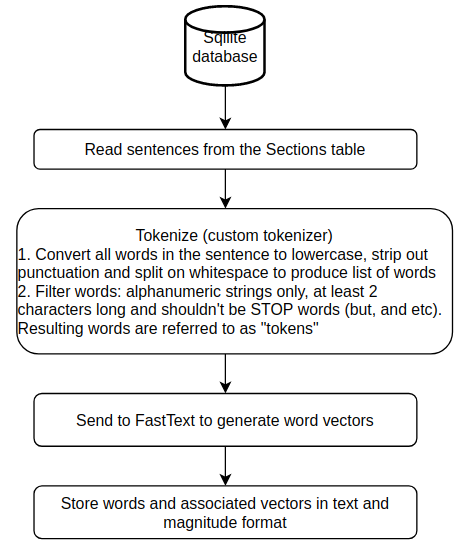 FastText takes two configuration parameters – embedding dimension (set to 300) and mincount (set to 3), which is the minimum number of times a token must appear for creating an embedding. The other parameters used in the word2vec algorithm such as the model type, learning rate, number of epochs, context window size etc., are left to their default values.

The default cord19q ETL system saves word embeddings in two formats – plain text and magnitude. The plain text format is simply a dictionary of (word, embedding) pairs, where an embedding is a list of 300 floating point values.

The total number of words in a natural language such as English is huge (specially when domain specific words are included) while the size of the vocabulary used in natural language processing systems is in the hundreds of thousands. The question arises, how do we represent the potentially infinite number of possible words using a relatively small vocabulary? This is the problem that tokenization aims to address. Tokenization can include a family of text processing techniques and can operate at both the sentence and word level. Some examples of text processing techniques are stemming/lemmatization and conversion to lower case. Stemming and lemmatization is the process of reducing inflection in words to their root forms such as mapping a group of words to the same stem even if the stem itself is not a valid word in the Language (playing, played, plays -> play, wanted, wants, wanting -> want etc).

A typical workflow in a NLP application and a simple example is shown below. In this contrived example, the vocabulary consists of just two words and any tokens not found in the vocabulary are replaced with the index of the “unknown” token.

Once we have the word embeddings, the next step is to use these word embeddings to create sentence embeddings. The obvious way to do this is to simply average the word embeddings for all the words that appear in a sentence. However this is likely not optimal because different words have different information content and embeddings of more important words should get a larger weight while creating the sentence embedding. The most popular way to calculate word importance is Term Frequency – Inverse Document Frequency (TF-IDF). TheTF-IDF value increases proportionally to the number of times a word appears in the document and is offset by the number of documents in the corpus that contain the word, which helps to adjust for the fact that some words appear more frequently in general (such as “the”). Many variants of TF-IDF exist and the cord19q ETL uses the BM25 variant. A comprehensive introduction and performance comparison of TF-IDF variants can be found in this paper.

The flowchart below shows the process of computing BM25 scores for each word. 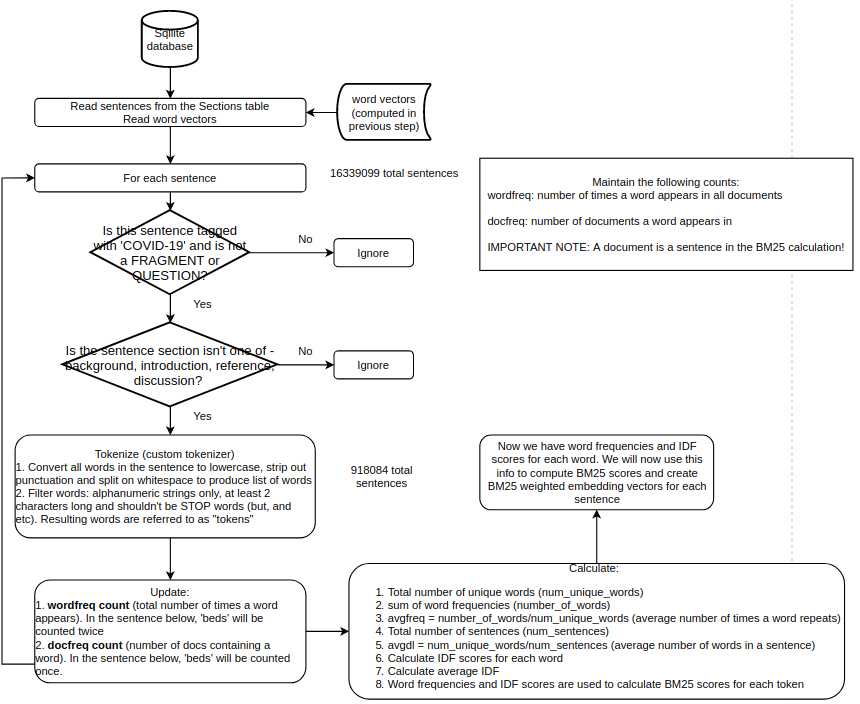 As mentioned earlier, only those sentences that come from documents tagged with the COVID-19 tag and aren’t a fragment or question are considered. The words in this filtered list of sentences are further filtered by removing stop words, words with fewer than 2 characters etc. Figure below shows this word filtering in action.

The resulting words are used to update the word frequency and document frequency counts which are then used to calculate the BM25 score for each word.

The parameters generated during the scoring process such as the word frequency and IDF (Inverse Document Frequency) frequency lists, average frequency, average IDF etc., are simply stored as a Python pickle file (scoring).

It is worth noting that the set of words for which embedding vectors are generated is not the same as set of words used to calculate BM25 statistics. There are two reasons for this:

The figure below shows a Venn diagram of these two sets of words along with some example of words that are in one set but not the other.

Once we have the word embeddings and the BM25 statistics for each word, we can easily calculate the BM25 weighted sentence embedding. Mathematically speaking, let

be the BM25 scores of the words in a sentence

after any filtering operations such as stop word removal are applied. Let

by the corresponding word embeddings. Then the embedding vector

The flowchart below shows the process of creating sentence embeddings. The filtering operations applied on the sentences and words within a sentence are the same as before. 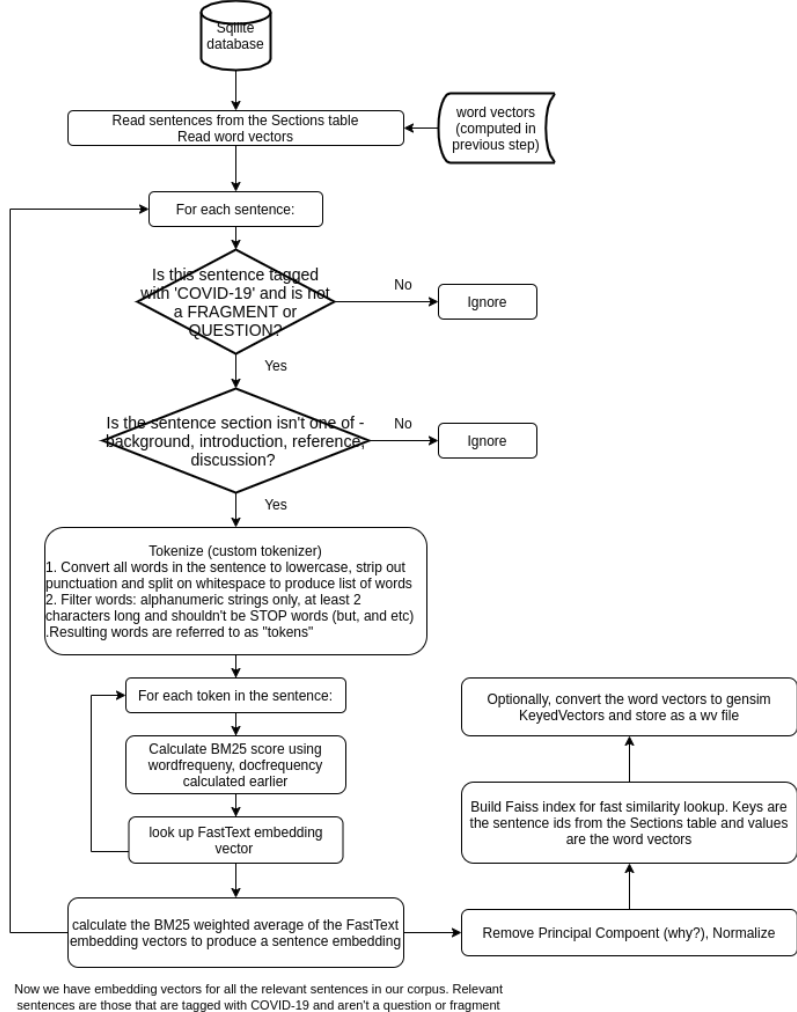 After the embeddings are calculated, the top principal component is removed. This is a common post-processing step in a NLP workflow. The intuition is that the highest variance components of the embedding matrix are corrupted by information other than lexical semantics. See this paper for more information

The sentence embeddings are saved to a embedding file using the write_index method of the Faiss library.

Finding the top-n matches for a given query

Finally, let’s consider how the sentence embeddings and BM25 scores are used to find the top-n matches for a user query. Given a query sentence, we first tokenize the query using the same rules used to tokenize the sentences in the corpus during embedding creation; use the BM25 scores and token embeddings to create an embedding representation for the query and then find the top-n sentences by using the lookup function in the Faiss library to do a fast similarity search. We then use the sentence ids of the top-n matches to query the sentence text and document uid from the Sections table followed by querying the Articles table to retrieve the article info using the document uid. The flowchart below shows this process.

Note that since the set of words used to compute BM25 scores and word embeddings don’t overlap, a query may contain words for which we have embeddings, but no BM25 statistics. For such words, average word and idf frequencies are used.

This concludes this post. In the next post, we’ll look at using BERT models fine-tuned on a question-answering task to identify relevant answer spans to a query. The body text of the articles retrieved by the top-n matching articles returned by the lookup described above act as input to the BERT model.