Over the past few days, I have been investigating how SSD (Single Shot Detector), an object detector introduced in the following paper (https://arxiv.org/pdf/1512.02325.pdf) in Dec 2016 that claims to achieve a better mAP than Faster R-CNN at a significantly reduced complexity and achieves much faster run time performance. I’ll describe the details of SSD in a subsequent blog. The purpose of this blog is to describe the data augmentation scheme used by SSD in detail. According to the paper, the use of data augmentation leads to a 8.8% improvement in the mAP.

Data augmentation is particularly important to improve detection accuracy for small objects as it creates zoomed in images where more of the object structure is visible to the classifier. Augmentation is also useful for handling images containing occluded objects by including cropped images in the training data where only part of the object may be visible.

The following data augmentation steps are used and are applied in the order listed. 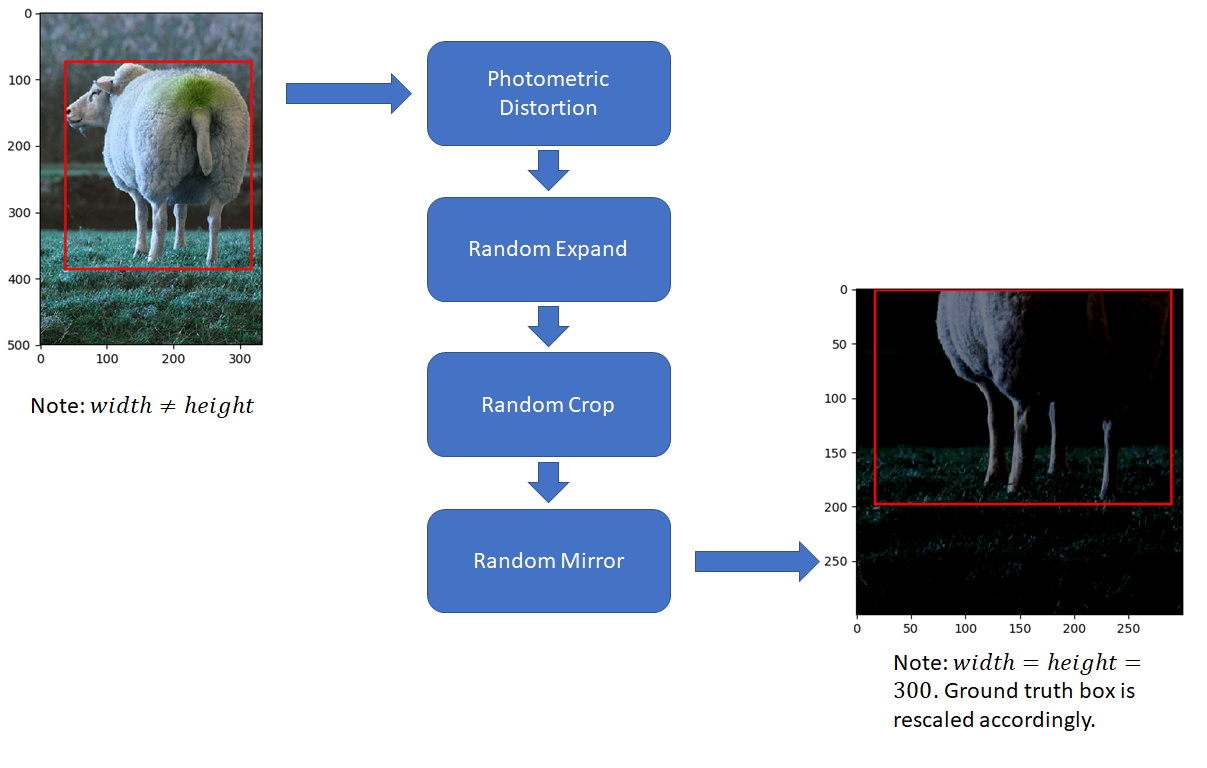 In the sections below, I’ll describe these steps in more detail.  Note that each distortion is applied probabilistically (usually with probability = 0.5). This means that different training runs will use different image data that results from the augmentation steps applied to the original training data. I will also include the relevant code snippets, making it easier to connect the algorithm with the code that implements it. I’ve used the following PyTorch code repository in my experiments – https://github.com/amdegroot/ssd.pytorch/

With probability 0.5 (see documentation for random.randint for why “2” is passed as an argument), this function adds a number selected randomly from [-delta, delta] to each image pixel. The default value of delta is 32

Application of contrast, hue and saturation is done in a manner similar to brightness. Each distortion is applied with probability 0.5, by selecting the distortion offset randomly between an upper and lower bound. The code for applying saturation distortion is shown below. 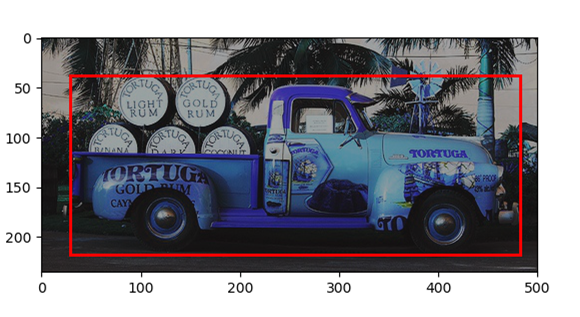 The last photometric distortion is “RandomLightingNoise”. This distortion involves a color channel swap and is also applied with probability 0.5. The following color swaps are defined:

For a RGB image, the swap (0 2 1) would involve swapping the green and blue channels, keeping the red channel unchanged. The swap that is actually applied is chosen randomly from this array.

The image produced after applying one of these swaps is shown below:

The goal of this step is to crop a patch out of the expanded image produced in ExpandImage such that this patch has some overlap with at least one groundtruth box and the centroid of at least one groundtruth box lies within the patch. This requirement makes sense as patches that don’t contain significant portion of foreground objects aren’t useful for training. At the same time, we do want to train on images where only parts of the foreground object are visible. The steps carried out in RandomCrop are shown in the figure below. 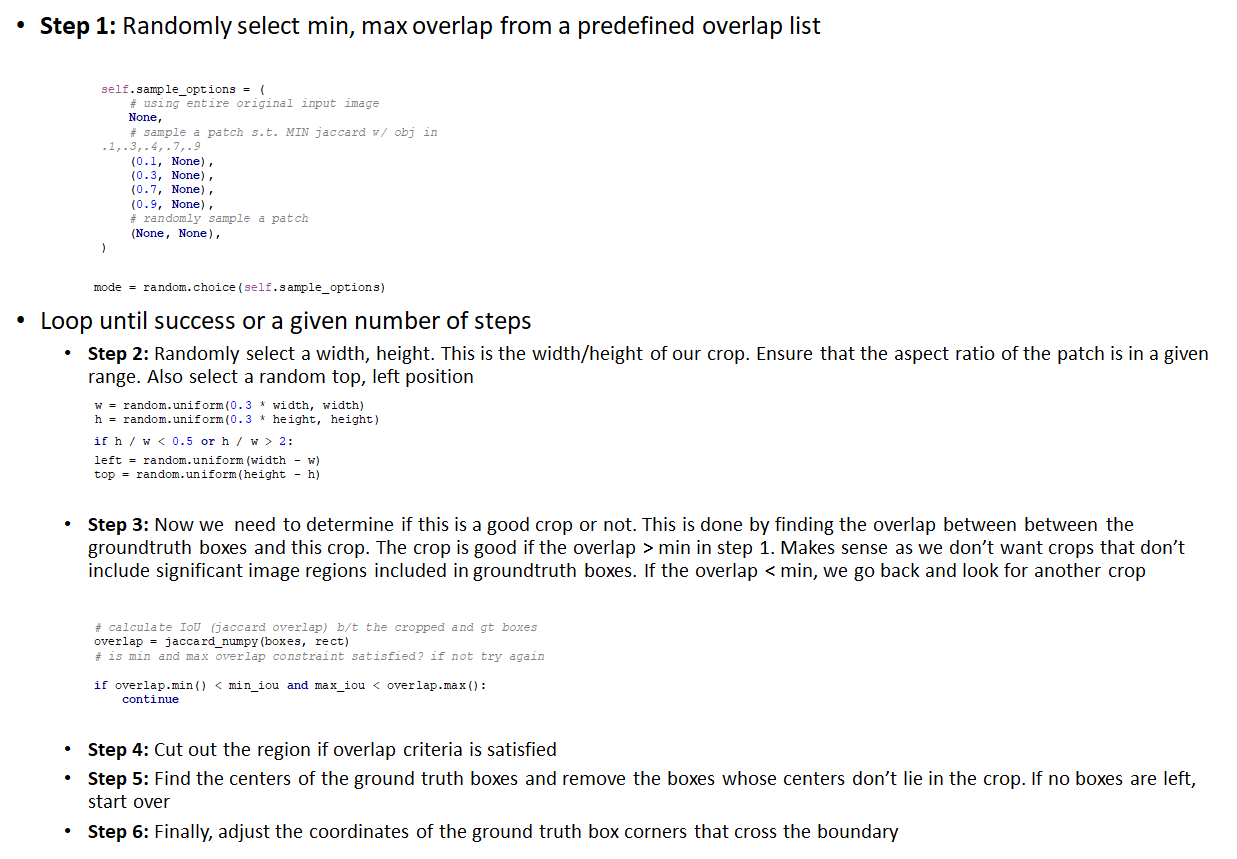 Let’s now look at a few examples to further illustrate these ideas. Ground truth boxes are shown in red while the cropped patch is shown in green in the images below. Recall that the RandomCrop step follows the ExpandImage step, which is applied with probability 0.5. So some of these images have an expansion canvas around them, while others don’t. 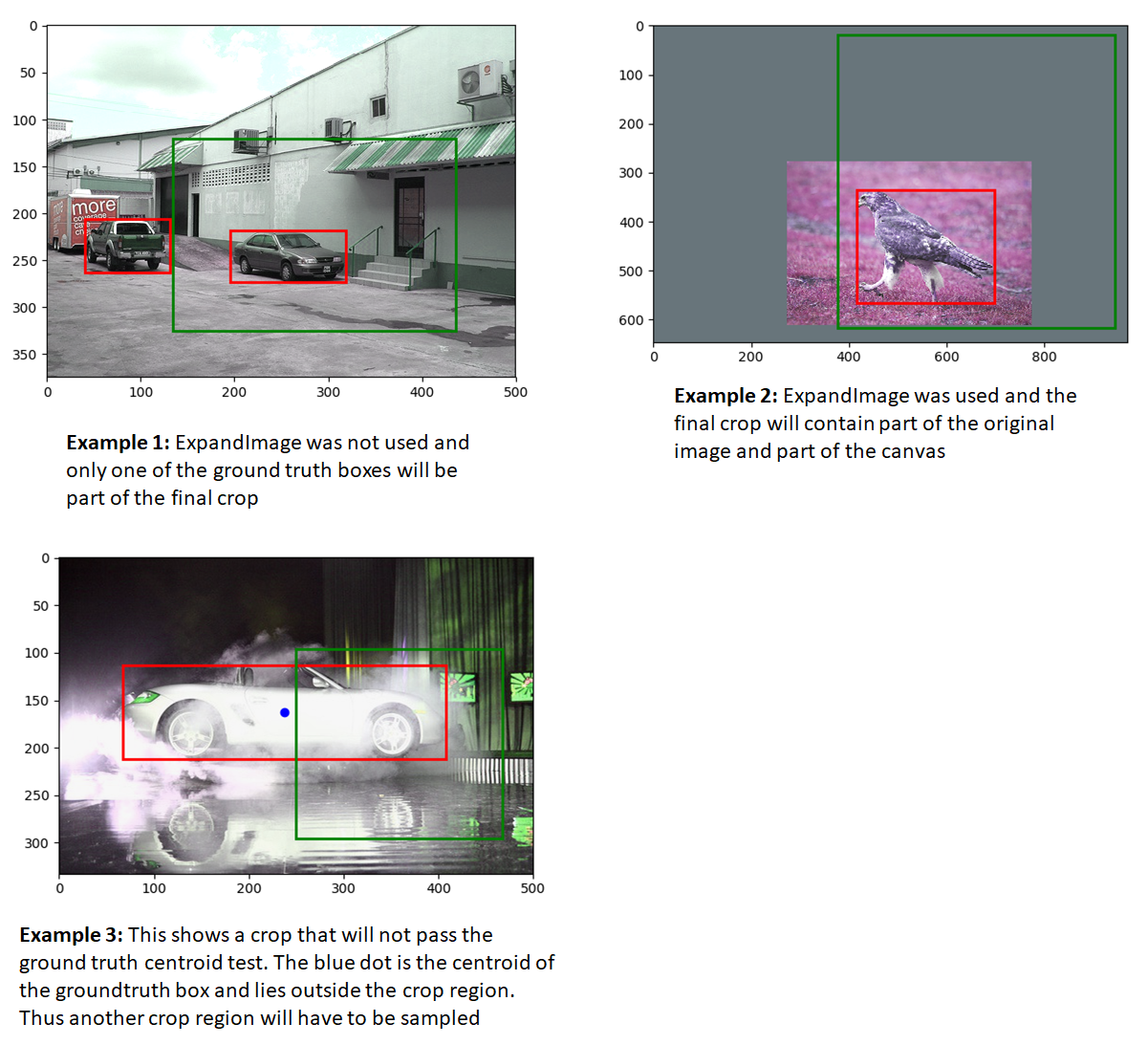 Finally, as in other object detection and image classification systems, the image is resized to 300, 300, ground truth coordinates are adjusted accordingly and normalized and mean is subtracted from the image.