I went to Boston on Aug 25th for work and stayed there until Aug 29th. Then I drove from Boston to NYC and stayed with a friend for a day and drove back to DC on Aug 30th. I hadn’t taken my Tesla out on a long drive since I bought it, so I decided to drive instead of flying or taking the train. I had a great time in both cities, but the highlight of the trip was driving the Tesla or rather, have the Tesla drive me. In this post, I’ll describe my experience using the Tesla superchargers and the self-driving features on the car (known as the “Autopilot”).

Preparing for a road trip on an electric car

The only preparation you need is to bump up your maximum charging level to 90-95% of battery capacity. During regular daily driving, you should keep your car’s battery between 30%-80% of maximum capacity (according to Elon Musk himself, see below) for optimal battery life. My Tesla model 3 extended range has a maximum range of 310 miles, so 80% of maximum capacity means a range of ~240 miles, more than sufficient for day-to-day driving needs. If you are taking the car out on a long drive, you can bump up the max charging level to 90-95% of battery capacity the night before you leave and get a bit more range. This will have little to no impact on battery life as long as you do it relatively infrequently. This is all the preparation you need.

Tesla’s navigation system comes with a trip planner that adds stops at superchargers along the way to your destination if need be. It also tells you how much charge you’ll have left when you reach your destination. If you plan to do significant driving at your destination, you can charge for longer or add another supercharger stop. The navigation system also offers voice enabled turn-by-turn directions which work well, although it is a good idea to compare the route Tesla picks with Google maps. They don’t always agree and Google maps directions tend to be better. This could be because Google maps has better real-time traffic reports.

The superchargers are generally located on the parking lots of rest stops along the major highways with many food/drink options within easy walking distance. Clicking on the supercharger icon on the center console shows you which food/drink options are available nearby and the cost per KWh (more on that below). So, supercharger stops generally won’t add extra time to your journey if you grab a bite to eat while the car is charging. The Tesla app will notify you when charging is about to finish. On many occasions, I found the time to order and finish a sandwich longer than the supercharging time.

Some superchargers are located inside parking garages you have to pay to enter. This can be quite costly particularly in big cities. For example, in Boston, I had to pay $12 to access the parking garage where the supercharger was located. I wish the trip planner application provided this information for every supercharger. Perhaps a future SW update can fix this? @ElonMusk 😉

According to Tesla, the cost of supercharging is ~0.28$/KWh. The full pricing structure is a bit complicated, see this for more details. The model 3 extended range has a 75 KWh battery, so charging the battery from empty to full costs $21.75.

My supercharging experience agrees with these figures. During my first supercharge, I paid ~$14.50 for 250 miles worth of charge. Compared against a gasoline-driven car that gets 30 miles a gallon, the effective cost/gallon is 14.50/(250/30)= 1.7$/gallon. Thus, supercharging is more than twice cheaper than gas. Model S used to come with free lifetime supercharging, but that is not the case with the model 3 unfortunately.

To conclude, if you are worried about getting stranded during long drives on an electric vehicle, you can rest assured. The existing supercharging infrastructure is already extensive enough that you will have no trouble finding a supercharger on the way. The time and cost of charging is also very reasonable. Charging options will improve further as more electric car options from other car makers become available and battery technology improves. I hope that the charging infrastructure from different car makers will be compatible across car models!

Using the autonomous driving features on the Tesla

From Artificial Intelligence to Virtual Reality, we live in a world full of amazing technologies. Since our wow factor is already quite high, it is relatively rare to encounter a technology that makes us say – “wow this is amazing”. This is particularly true for technologists such as myself. The autonomous driving features in a Tesla is one such technology. My car drove itself most of the way during my trip and saved me significant driving effort. It was simply amazing.

Currently, the model 3 comes with two options for self-driving features. The base option is the standard autopilot which enables the car to steer, accelerate and brake automatically within its lane. For 6K extra, you can get the other option – full self-driving capability which offers additional capabilities, as shown below.

During highway driving, turning on cruise control and auto-steer essentially means the car will drive itself. However, Tesla still wants you to pay attention and be ready to take control at any time. So, every 20 seconds or so, it will ask you (through visual and audio warnings) to apply slight torque to the steering wheel to make sure you are awake and paying attention. If you fail to heed the warnings, auto-steer will be disabled for the duration of the trip. If this happens, you can reset the “trip” by coming to a full stop and putting the car in park.

The cruise control + auto-steer works amazingly well during highway driving – when traffic is flowing freely as well as during stop-and-go traffic. However, it is not meant to be used during city driving because the system doesn’t detect traffic lights and will happily drive through a red light. The system also doesn’t detect potholes.

A few things I noticed during my trip: 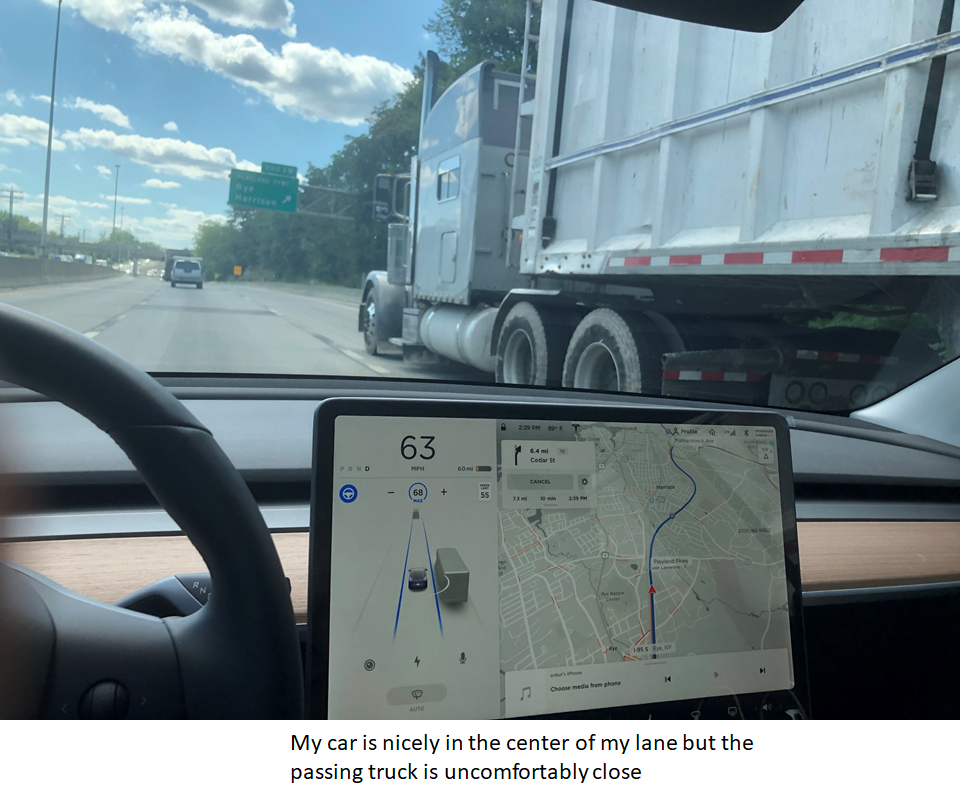 I used the cruise control + auto-steer during most of the highway driving on the way to and from Boston. It works amazingly well and saves significant driving effort. At the end of my ~9 hour drive from DC to Boston, I was much less fatigued than I usually am after such a long drive.

There are many opinions on how soon fully autonomous vehicles will become available (next year according to Elon), however, the self-driving features currently available already make long drives much easier.

Tesla cars already come equipped with all the sensors and compute hardware for full self-driving. So, if/when full self-driving algorithms are ready, you can simply install those as an over-the-air software update, much like a smart phone! Automobiles are finally stepping into the 21st century :-).