The purpose of this post is to provide some additional insights and Matlab and CNTK implementations for the two layer network used to classify a spiral dataset described in the following lecture of Stanford’s “Convolutional Neural Networks for Visual Recognition” class.

Using a neural network to classify a spiral dataset powerfully illustrates the effectiveness of NNs to handle inherently non-linear problems. It is evident that no linear classifier will be able to do a good job classifying spiral data where the boundary between two classes is a curve. A simple two layer network with RELU activation on the hidden layer automatically learns the decision boundaries and achieves a 99% classification accuracy on such a data set.

The problem description on the course website does a great job describing the problem, the architecture of the neural network used to solve it and the calculations in the forward and backward pass. This post makes the following contributions:

Our input data consists of 2D points (2 by 1 vectors) that are distributed along three spiral shaped arms. Clearly, a classifier with linear decision boundaries will be inadequate to classify such as dataset. 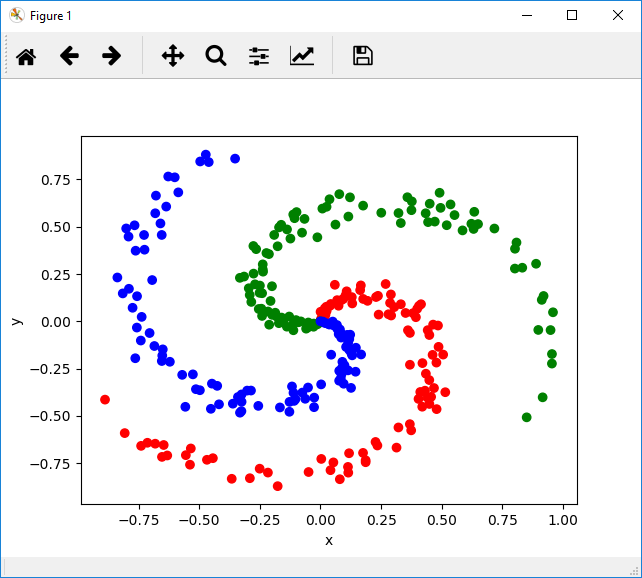 Movie Showing the Evolution of the Decision Boundaries

The movie shows the decision boundaries as they are learnt by the network. The boundaries start off linear but the network very quickly learns to bend them so they fit the contours of the data. This can be seen in the very sharp drop in the loss function in the beginning of the optimization.

You may be interested in the technique used to draw the decision boundaries and make the movie. For every “key frame” in the iteration, I ask the network to classify every point on the image frame (whose size is chosen to span our input data) by running the forward pass of the network. Each class is then drawn in a different color. The frequency of the “key frames” will depend upon how long you want the movie to be – if you have 2000 iterations and want the movie to be 6 seconds long playing at 15 FPS, you’ll need 90 frames. This means roughly 1 key frame every 20 iterations. The Matlab code to make the movie is included in the zip.

Variation of Classification Accuracy and Rate of Convergence with Step Size 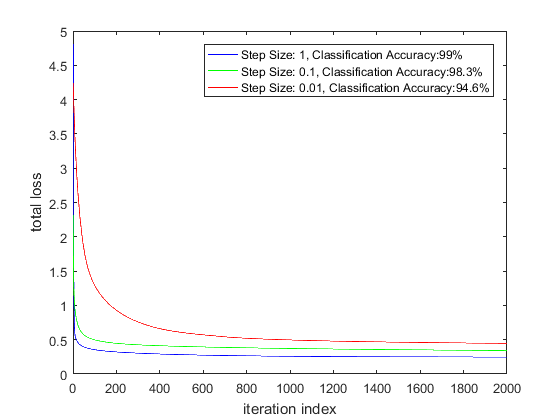 As expected, the loss function decays more slowly for lower step sizes. Somewhat surprisingly, the classification accuracy is slightly different for different step sizes. This could be because there are multiple local minimas at the bottom of the loss function valley. Since I’m using a constant step size during the optimization (instead of an adaptive technique where the step size is modified based on the first and second moment of the gradients), perhaps the optimization is achieving a slightly different minimum for different step sizes.

The plots below show the evolution of the loss function for the Matlab and CNTK implementation (left plot: Matlab, right plot: CNTK) for step size = 1. 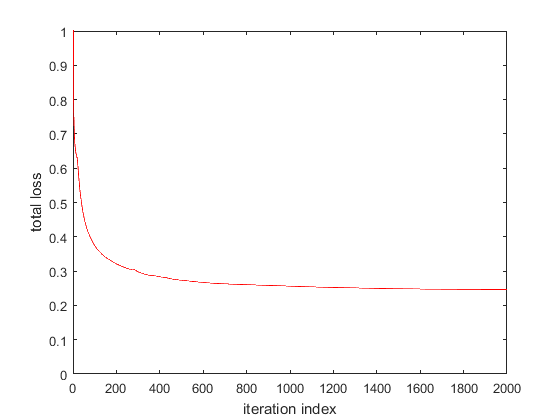 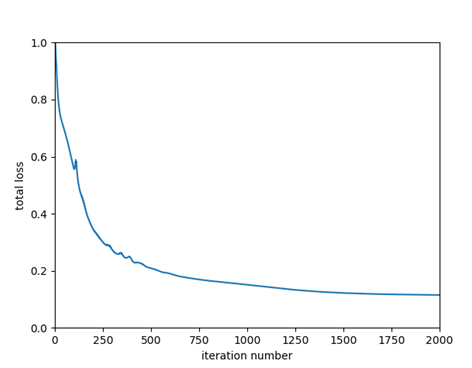 CNTK achieves a slightly lower total loss because the CNTK loss function comprises only of softmax with cross entropy component, not the L2 weight regularization component. Later, we’ll see how we can customize CNTK to use our loss function that adds the L2 regularization component to softmax with cross entropy. We’ll also replace CNTK’s Stochastic Gradient Descent implementation with our own.

Changing the Number of Neurons in the Hidden Layer

Next, let’s consider the effect of changing the number of neurons in the hidden layer. Classification accuracy for both the Matlab implementation and CNTK implementation is reported.

One can reduce the number of neurons in the hidden layer to 7 before the classification accuracy starts to drop significantly!

CNTK provides built-in implementations for commonly used loss functions such as softmax with cross entropy and trainers such as Stochastic Gradient Descent, ADAM 1, ADAGRAD2 and some of their variants. However, some problems require implementing a custom loss and training function. CNTK’s implementation of softmax with cross entropy loss doesn’t include the contribution from weight regularization, although the gradient of the weight regularization is included in the gradient calculation and parameter update. As mentioned earlier, this is the reason why the final loss computed by CNTK is slightly lower than the loss computed by our Matlab implementation. One can ask CNTK to use a custom loss function as follows:

Using this loss function, the final value of the total loss is very similar for the CNTK and Matlab implementations

Similarly, you can also insert your own parameter update logic by defining a custom trainer, as follows: