We will also consider exploiting the unique structure of the Jacobian matrix in the bundle adjustment problem that permit the use of matrix factorization techniques to solve the camera and structure parameters more efficiently than computing a direct matrix inverse.

Adding the Jacobian of the Object Points

The jacobians of the image points with respect to the object points are added as shown below.

Our experimental setup is similar to the set up on part 3 of this series. We consider 16 points along the vertices of rectangles displaced from each other along the camera optical axis. This constellation of 16 points is viewed by 4 cameras. Every point is assumed to be visible in every view.

We add roughly 5% noise to the camera intrinsic and extrinsic parameters and to the object point locations. The noise is normally distributed and centered on the true values of the parameters. The details of the simulation set up is described in the previous post. 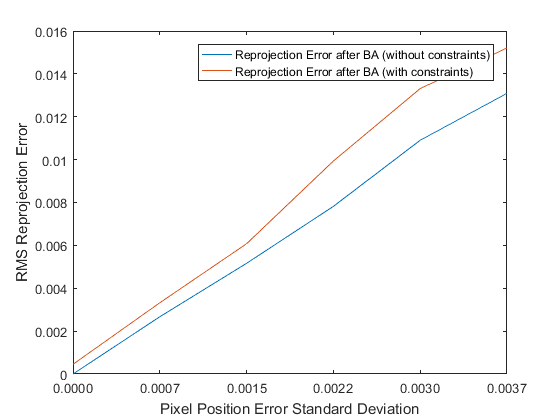 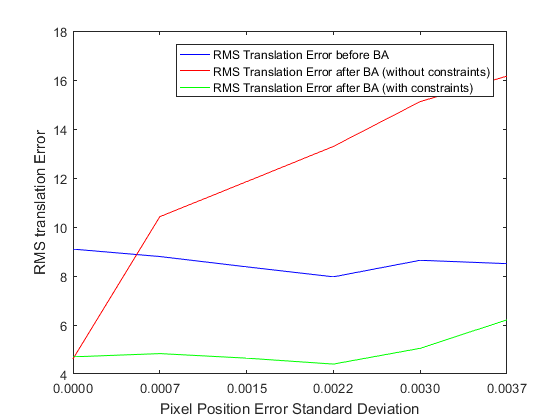 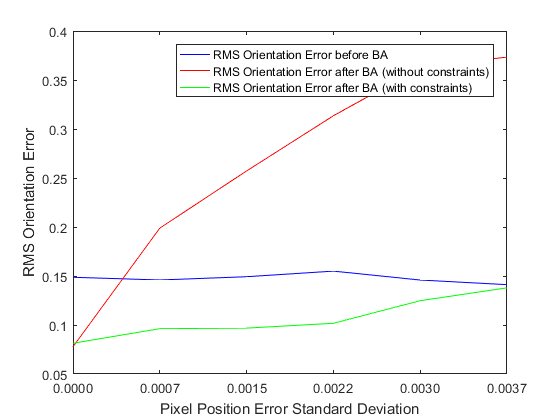 As can be seen, the constrained optimization continues to make improvements to the starting guesses for the camera parameters and object points and the amount of improvement made decreases as noise is added to the image. However, with the addition of the object point locations, the optimization is now more sensitive to image noise (particularly for the intrinsic parameters). This is expected, as the number of parameters to optimize is significantly larger.

In a practical bundle adjustment application, the number of object points and cameras would be significantly larger than that considered here, so one shouldn’t read too much into these results, however I think it is safe to conclude that:

Exploiting the Special Structure of the Jacobian Matrix

So far, we have been solving for the parameter update by computing a direct inverse of the Hessian matrix. Doing so is both inefficient and error prone. As the size of the bundle adjustment problem gets larger, the Hessian matrix becomes more ill-conditioned. For example, the typical condition number of the Hessian matrix is ~1e -10 (calculated using rcond function in Matlab). Morever, calculating the inverse (a

operation) gets prohibitively expensive as the size of the Hessian gets larger.

Following the treatment in 1, we partition the Hessian matrix and image projection residuals as follows: 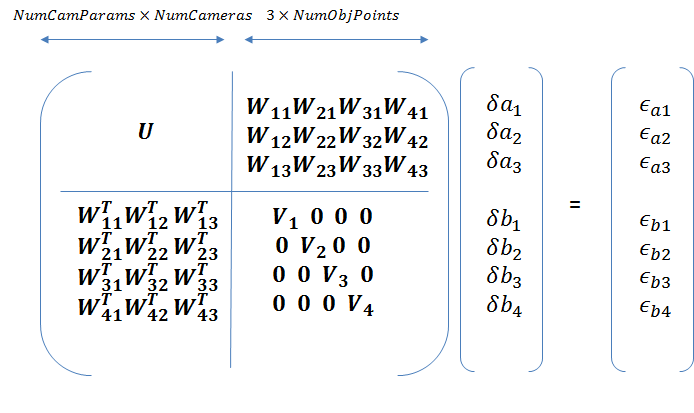 will consist of diagonal blocks if the camera parameter blocks are independent (unconstrained optimization). When the single camera constraint is enforced,

will no longer be block diagonal.

The block diagonal structure of the

should always have the block diagonal structure.

Writing the equation above more compactly,

Since the top right block of the matrix above is 0, the dependence of the camera parameters on the structure parameters is eliminated and therefore

can be determined by solving

is the schur compliment of

and can be solved efficiently using Cholesky factorization. Once

can be obtained by solving

Solving this equation requires computing the inverse of

. However due to the special structure of the bundle adjustment problem, the inverse of V is simply the concatenation of the inverses of the

The complexity of calculating

matrix is also much higher, and therefore computing the inverse of

is numerically more stable than computing the inverse of the original Hessian matrix.

The Matlab code for computing the parameter updates using this method is shown below. For simplicity, we are not taking advantage of the block diagonal structure of

in this code and instead computing the inverse directly.

As noted by Haralick2, appropriately scaling the image points is critically important in obtaining a numerically stable solution for the fundamental matrix. A similar principle applies to the bundle adjustment problem. I scaled the focal length by a factor of 1000 to obtain typical image coordinates in pixel dimensions (of the order of 100s). Running the BA optimization on the scaled image coordinates produced very poor results. I then scaled the image points and the objects points as noted by Haralick such that the points are centered about the origin and the mean distance of the image points from the origin is

and that of the object points from the origin is

. Doing so restored the numerical stability of the bundle adjustment optimization. The Matlab code for the normalization functions is shown below.

Choosing the Right Parameterization for Rotation

vector and jacobians with respect to the quaternion elements have to be used) and found that the performance is quite poor. The reason for the poor performance is likely the extra degree of freedom introduced by using the quaternion representation. The unit norm constraint can be enforced by using lagrange parameters. Schmidt and Niemann also present a technique to enforce the unit norm constraint without using lagrange parameters3. I have not implemented this technique.

Our Bundle Adjustment vs. Matlab lsqnonlin

Matlab provides built-in implementation for many least squares optimization methods such as Levenberg-Marquardt and Trust-Region-Reflective. We compared the image reprojection errors and orientation, translation, instrinsic parameters and object point estimation errors of our BA implementation with those of Matlab. To recap, our simulation procedure is shown below. 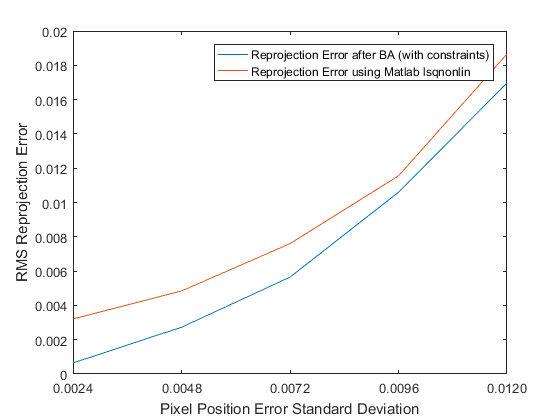 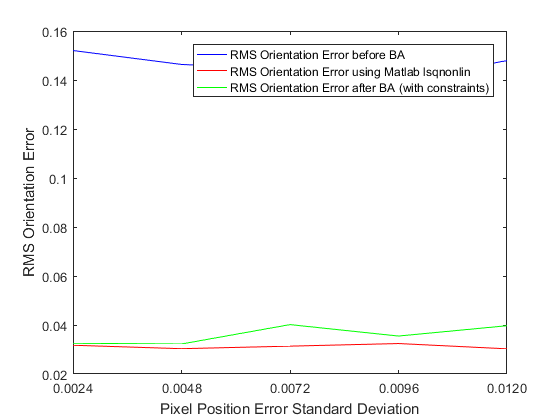 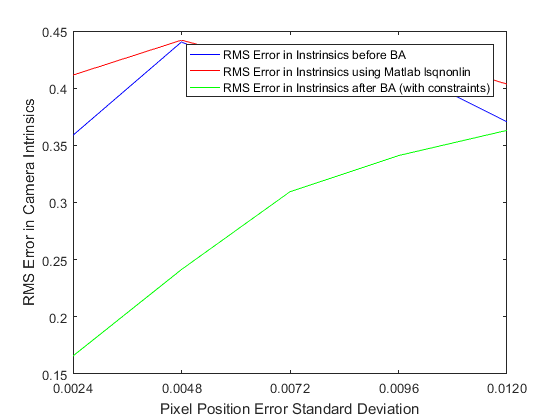 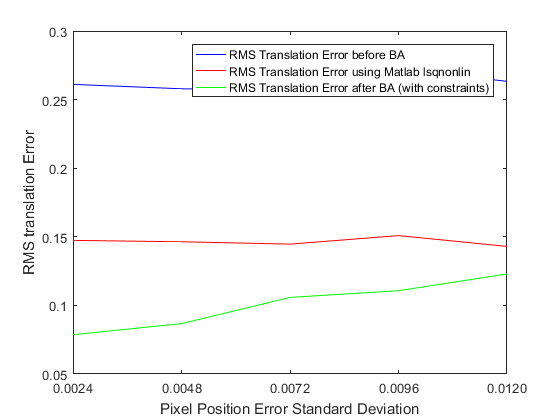 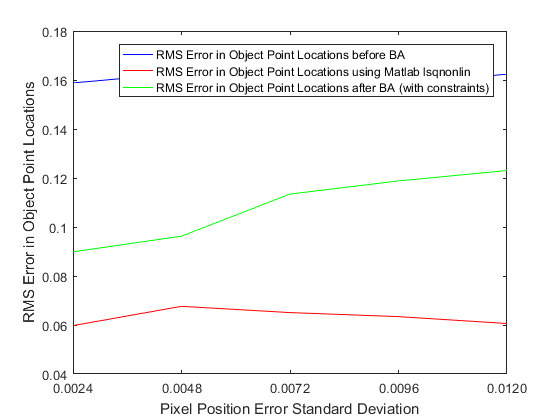