In the previous posts we considered how to calculate the Jacobians for Bundle Adjustment (BA) and their relative magnitudes and some of their properties. In this post, we’ll look at some practical implementation details of implementing BA.

Let’s quickly recap the problem we are trying to solve. Assume each camera

is parameterized by a vector

and each 3D point

is the predicted projection of point

. The minimization is performed with respect to vectors

consists of the 3D coordinates of point

Together, these parameters are combined as follows to project a 3D world point on the image using the standard perspective projection equation.

Henceforth, we’ll assume that our camera is a rectilinear camera with square pixels. Thus,

pairs of independent and dependent variables,

find the parameters  of the function

so that the sum of the squares of the deviations is minimized:

As shown in 1, the least squares solution to this problem is obtained by solving a series of linear equations expressed in matrix form:

Levenberg’s contribution is to add a damping factor

to the equation above, so that we are solving:

is adjusted at each iteration. If at the end of an iteration, the objective function is lower than before,

can be lowered, otherwise it is increased.

Marquardt provided the insight that we can scale each component of the gradient according to the curvature so that there is larger movement along the directions where the gradient is smaller. This avoids slow convergence in the direction of small gradient. Therefore, Marquardt replaced the identity matrix I, with a diagonal matrix consisting of the diagonal elements of

resulting in the Levenberg–Marquardt algorithm:

We’ll examine the effects of using the levenberg and Marquardt modifications when we look at our simulation results.

matrix that arises when bundle adjustment is applied to images resulting from perspective projection. Let’s assume we have:

To keep things simple, we’ll assume that each object point is visible in each camera (this assumption is not required and we’ll briefly consider the changes necessary to relax this assumption). The number of parameters for each camera is a combination of the camera intrinsic parameters such as camera center and focal length and extrinsic parameters such as the camera position and orientation in the world coordinate system. In our simulations, we assume that pixels are square and there is no skew. Thus the camera parameters consist of the axis-angle representation of the camera pose (

) and the focal length (

Let us use the following notation: 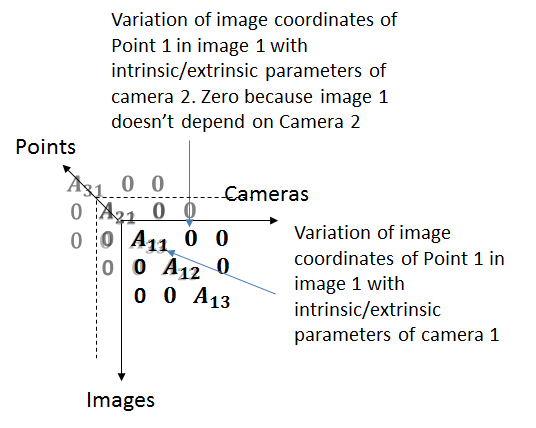 It’s easy to see that the matrix is highly sparse as changing the parameters of one camera only affects the image taken by that camera.

We can unroll the third dimension of the matrix and append the sub matrices corresponding to different points columnwise, so that the camera parameter part of the jacobian matrix looks like this:

Let’s now consider the variation of image coordinates with the 3D object points.

with the coordinates of the object point

. Since change in the 3D position of one point doesn’t effect the image coordinates of another point,

matrix laid out as follows: 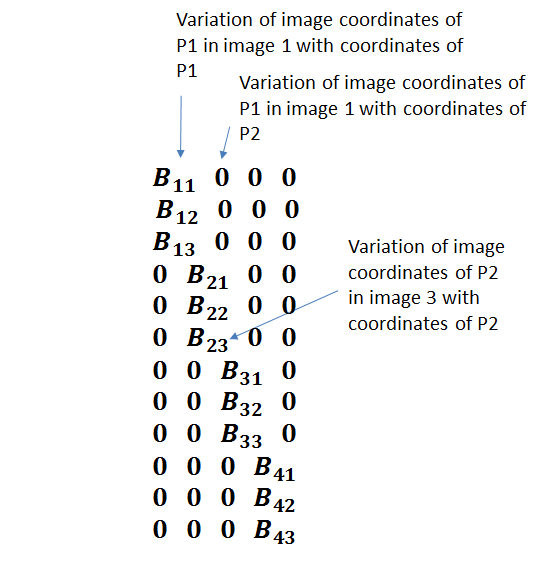 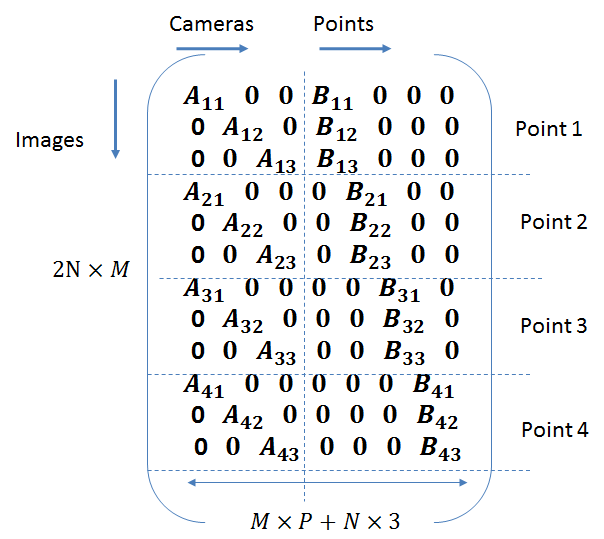 consists of the image coordinates laid out in a column vector.

Before I describe the process and results of my simulations, let’s note one implementation detail. In my implementation, I separated the x and y components of the Jacobians so that the Jacobian matrix looks like this: 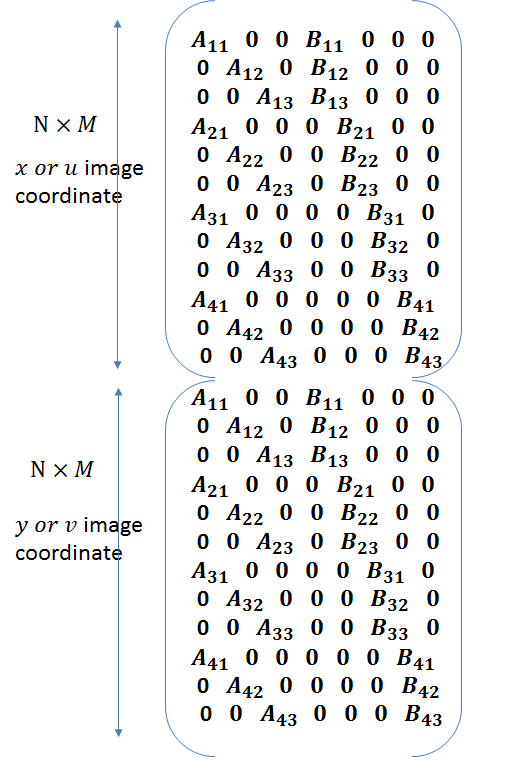 vector also needs to be rearranged accordingly. It now looks like this:

In my simulations, I considered 8 points located at the corners of a cube being viewed by multiple cameras. The set-up looks like this (only showing two cameras): 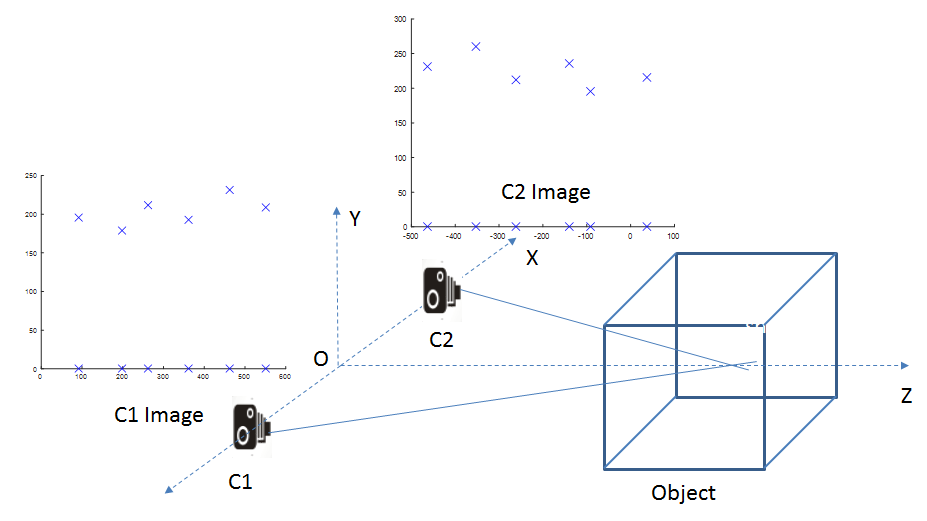 I carried out two set of simulations. In the first set, only the intrinsic and extrinsic parameters of the cameras were optimized. The position of the 3D points was not subject to the optimization. Thus, the jacobian matrix only consisted of the

submatrices. In the second set, all parameters, including the position of the 3D points were part of the optimization.

Let us now look at the Matlab code for the first set.

Let’s now look at the results of our simulations. The goal is to evaluate the relationship between image noise level and the difference between optimized camera parameters and the true camera parameters. We don’t optimize over the 3D position of the object points which are assumed to be known with high accuracy. This scenario models the optimization carried out during camera calibration, where the position of the object points (corners of the calibration pattern) is known through direct measurements. One difference between the camera calibration scenario and this simulation is that it is customary to use a planar calibration pattern during camera calibration, and thus the image coordinates on different images of the pattern are related to each other by a homography. In our simulation, the object points are non-coplanar and their image coordinates follow the epipolar constraint and are not related by a homography.

We expect that as noise is added to the image, the distance between the optimized camera parameters and the true parameters would increase. This is indeed borne out by our simulation, as shown in the plots below.

The pseudo-code for the simulation is shown below.

In our simulations, we use points located on the corners of 3 planes displaced from each other by a fixed distance, leading to 12 points in total. These points are viewed by 4 cameras. The view from one of the cameras is shown below. 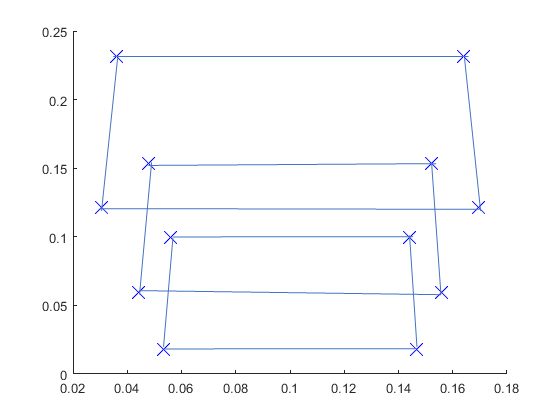 Denoting the optimized value of parameter P by

and original value by

, the RMS error is given by:

For orientation, the rotation error matrix is first calculated (

) and the error matrix is converted into the axis-angle representation. The axis-angle vector is then used as a regular vector in the expression for RMS error above. 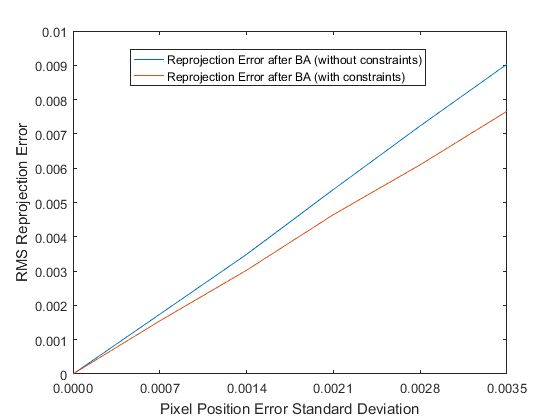 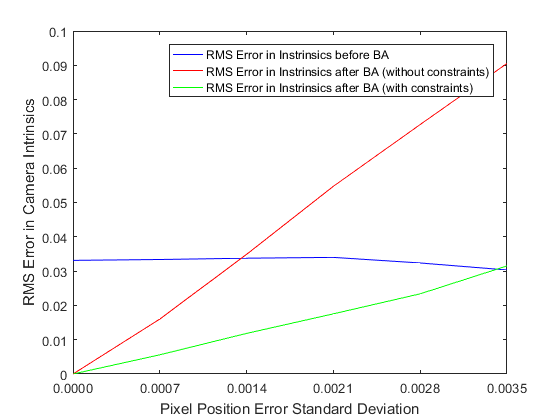 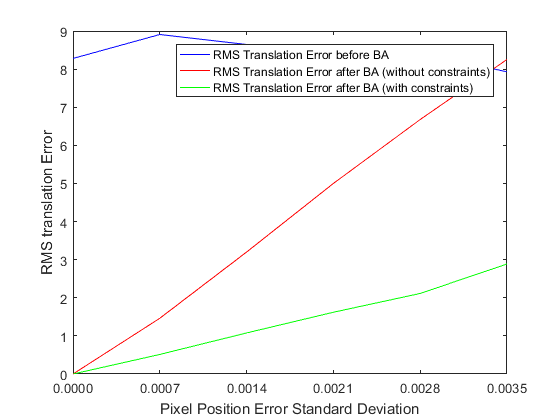 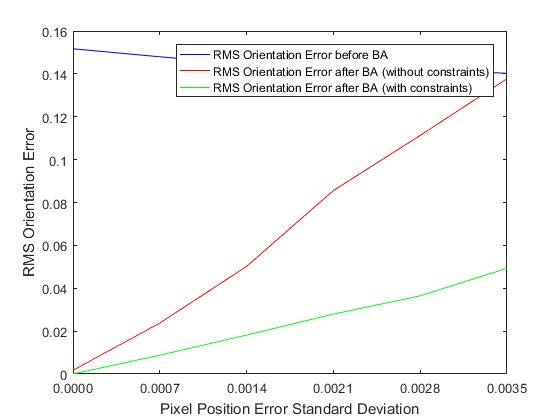 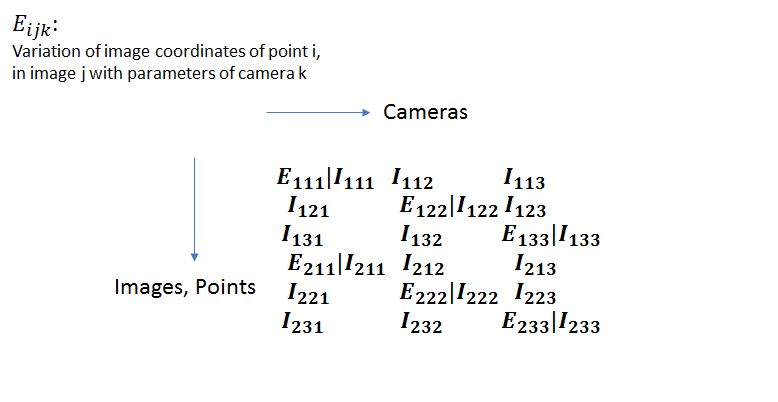 In the figure above, we have broken an individual jacobian entry into its extrinsic and intrinsic component, and also shown the point, image and camera indicies separately. The variation of the image coordinates with the object points (

Relative Values of the Orientation/Translation/Intrinsics Jacobians

In this section, I’ll attempt to provide some insights on the relative values of the jacobians of the orientation, translation and intrinsic parameters. Consider a point

between the two coordinate systems. Let’s also assume that the camera under consideration is a normalized camera with focal length and image center =

. The image coordinates of

From the figure below,

For simplicity, let’s represent the rotation of the object coordinate system by Euler angles, with

denoting the angle of rotation about the

axes. Let’s consider the first row of Jacobian matrix of the camera parameters.

Now let’s consider the first row of the Jacobian of the Object points. Denoting the coordinates of

in the camera coordinate system by

From these numbers, we can make the following observations:

These observations are verified by the actual Jacobian values in our simulations.

Lastly, we’ll consider the effect of the Levenberg and Marquardt modifications used in the Levenberg Marquardt optimization. Recall that Levenberg contribution was to introduce a damping factor that is increased or decreased after every iteration depending upon whether the objective function is higher or lower than in the previous iteration. Marquardt added a term to scale each component of the gradient so that there is larger movement along the direction where the gradient is smaller. The number of iterations the optimization takes to converge with these improvements is shown in the table below:

From this table it is clear that the Levenberg-Marquardt improvements have a significant impact on the speed of convergence. The Marquardt improvement also helps the optimizations avoid local minimums that result from the interplay between focal length and the z component of the translation vector. For some orientations, similar amounts of reduction in the objection function can be achieved by either decreasing/increasing the z component of the translation vector or decreasing/increasing the focal length. The Marquardt optimization discourages the optimization from favoring changes in focal length over changes in the translation.

In the next post, we’ll consider the second second of simulations, where we also optimize over the positions of the 3D object points.